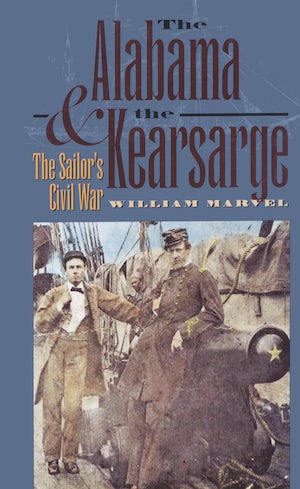 On June 19, 1864, the Confederate cruiser Alabama and the USS Kearsarge faced off in the English Channel outside the French port of Cherbourg. About an hour after the Alabama fired the first shot, it began to sink, and its crew was forced to wave the white flag of surrender.

Working with personal papers and diaries and contemporary reports, historian William Marvel interweaves the stories of these two celebrated Civil War warships, from their construction to their climactic encounter off Cherbourg. Just as importantly, he illuminates the day-to-day experiences of their crews. From cabin boys to officers, sailors have been one of the most ignored groups of the Civil War.

The sailors’ lot was one of constant discomfort and monotony, interspersed with riotous frolics ashore and, occasionally, a few minutes of intense excitement and danger. Housed in damp, crowded quarters, their wartime mortality rate did not reach that of their army counterparts, but service-connected diseases shortened their postwar lives disproportionately. Most of the crewmen ended their lives in nameless obscurity, and their story has remained unwritten until now.

William Marvel’s many books include Andersonville: The Last Depot and Lee’s Last Retreat: The Flight to Appomattox (both from the University of North Carolina Press). He lives in South Conway, New Hampshire.
For more information about William Marvel, visit the Author Page.

"William Marvel knows how to tell a good story."--KLIATT

“A fascinating introduction to the common sailor worthy of comparison with the best works on the war’s common soldiers and one well worth adding to any Civil War library.”--J. Tracy Power, Society for Civil War Historians Newsletter

"Marvel's well-written account of life aboard the two ships should interest both the specialist and the general reader."--Journal of Southern History

"[Marvel] has richly tapped new sources by locating the journals, diaries, and letters written by eyewitnesses serving on the only two steam sloops of war to engage in a stand-up battle at sea during the Civil War. . . . The story flows as smoothly as a ship scudding along with a pleasant breeze, and those who love the Civil War at sea will enjoy their cruise with William Marvel's book."--Journal of American History

"Highly recommended to those interested in the Civil War at sea."--Blue & Gray

"Well written and persuasively argued, Marvel's study will make quite a splash. General readers, students, and scholars alike will enjoy it and learn much."--Choice