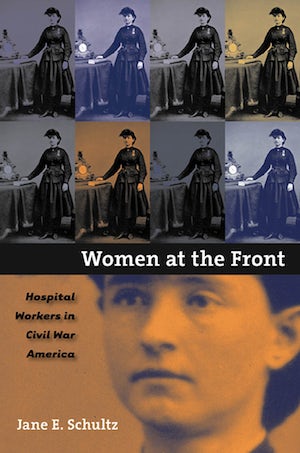 As many as 20,000 women worked in Union and Confederate hospitals during America's bloodiest war. Black and white, and from various social classes, these women served as nurses, administrators, matrons, seamstresses, cooks, laundresses, and custodial workers. Jane E. Schultz provides the first full history of these female relief workers, showing how the domestic and military arenas merged in Civil War America, blurring the line between homefront and battlefront.

Schultz uses government records, private manuscripts, and published sources by and about women hospital workers, some of whom are familiar--such as Dorothea Dix, Clara Barton, Louisa May Alcott, and Sojourner Truth--but most of whom are not well-known. Examining the lives and legacies of these women, Schultz considers who they were, how they became involved in wartime hospital work, how they adjusted to it, and how they challenged it. She demonstrates that class, race, and gender roles linked female workers with soldiers, both black and white, but became sites of conflict between the women and doctors and even among themselves.

Schultz also explores the women's postwar lives--their professional and domestic choices, their pursuit of pensions, and their memorials to the war in published narratives. Surprisingly few parlayed their war experience into postwar medical work, and their extremely varied postwar experiences, Schultz argues, defy any simple narrative of pre-professionalism, triumphalism, or conciliation.

"Schultz has enriched the historiography on women's war experiences in general and on the formative role of gender . . . in this particular war."--Military History of the West

"[An] absorbing and meticulously researched history, and a useful introduction to Civil War histories written in the early postwar period."--Metascience

"This absorbing book recovers a largely unknown history of the twenty thousand women who served Confederate and Union hospitals during the Civil War. . . . [A] compelling . . . account that is both empathic and unsentimental toward [the] subjects. The result is a nuanced and thoughtful interpretation of women at the front."--Journal of Southern History

"[Schultz] alone has assiduously mined a treasure trove of . . . information. . . . [This] superlative book is invaluable and should be read and considered by everyone interested in the Civil War."--Historian

"Indispensable for any one interested in the vast contributions that women North and South, black and white, made to the relief of suffering of the sick, wounded, and dying soldiers of the Union and Confederate armies."--Journal of Civil War Medicine