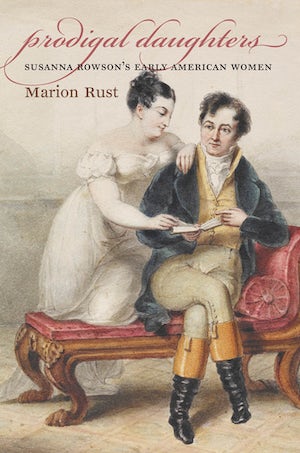 Susanna Rowson--novelist, actress, playwright, poet, school founder, and early national celebrity--bears little resemblance to the title character in her most famous creation, Charlotte Temple. Yet this best-selling novel has long been perceived as the prime exemplar of female passivity and subjugation in the early Republic. Marion Rust disrupts this view by placing the novel in the context of Rowson's life and other writings. Rust shows how an early form of American sentimentalism mediated the constantly shifting balance between autonomy and submission that is key to understanding both Rowson's work and the lives of early American women.

Rust proposes that Rowson found a wide female audience in the young Republic because she articulated meaningful female agency without sacrificing accountability to authority, a particularly useful skill in a nation that idealized womanhood while denying women the most basic rights. Rowson, herself an expert at personal reinvention, invited her readers, theatrical audiences, and students to value carefully crafted female self-presentation as an instrument for the attainment of greater influence. Prodigal Daughters demonstrates some of the ways in which literature and lived experience overlapped, especially for women trying to find room for themselves in an increasingly hostile public arena.

Marion Rust is assistant professor of English at the University of Kentucky.
For more information about Marion Rust, visit the Author Page.

"Far more than an important addition to scholarship on Rowson . . . Rust provides an important reevaluation of women's literary and public strategies during this pivotal period in American literary history."--Journal of American History

"Marks the starting point for a new era of Rowson scholarship."--William and Mary Quarterly

"Rust's biographical material is persuasive. . . . [She] creates a convincing link between the women readers that Rowson . . . reached and the women activists of 1848."--Women's Review of Books

"Marion Rust writes a wonderful narrative about why Rowson was an important woman and the impact that her writing had on the early U.S. Republic."--BookWoman/BookMan

"[An] engaging and valuable study."--Tulsa Studies in Women's Literature