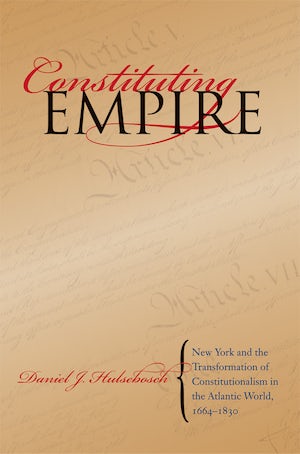 According to the traditional understanding of American constitutional law, the Revolution produced a new conception of the constitution as a set of restrictions on the power of the state rather than a mere description of governmental roles. Daniel J. Hulsebosch complicates this viewpoint by arguing that American ideas of constitutions were based on British ones and that, in New York, those ideas evolved over the long eighteenth century as New York moved from the periphery of the British Atlantic empire to the center of a new continental empire.

Hulsebosch explains how colonists and administrators reconfigured British legal sources to suit their needs in an expanding empire. In this story, familiar characters such as Alexander Hamilton and James Kent appear in a new light as among the nation's most important framers, and forgotten loyalists such as Superintendent of Indian Affairs Sir William Johnson and lawyer William Smith Jr. are rightly returned to places of prominence.

In his paradigm-shifting analysis, Hulsebosch captures the essential paradox at the heart of American constitutional history: the Revolution, which brought political independence and substituted the people for the British crown as the source of legitimate authority, also led to the establishment of a newly powerful constitution and a new postcolonial genre of constitutional law that would have been the envy of the British imperial agents who had struggled to govern the colonies before the Revolution.

"Hulsebosch offers superb accounts of constitution-writing in New York. . . . [His] brilliant book will have a profound impact on our understanding of the American Revolution and the early history of state-making in the federal republic."--Law and History Review

"A pleasure to read. . . . [Constituting Empire: New York and the Transformation of Constitutionalism in the Atlantic World] is an important book for legal historians, but it should also be an enjoyable book for a much wider audience."--American Historical Review

"An interesting and important dimension to the old Progressive historical perspective that explains how a divided people became one."--Journal of the Early Republic

"Provocative. . . . Hulsebosch has successfully placed early American constitutional history in two critical contexts: the social history of mobility as well as the intellectual paradigm of empire. The result deserves to be read by both social historians and legal scholars of this period."--William and Mary Quarterly

“Hulsebosch brilliantly describes [how] the constitution of the British Empire was rarely settled and almost always hotly contested. There were, Hulsebosch tells us, many constitutions of empire in the eighteenth-century British Atlantic, at least three of which played themselves out in the American Revolution.”--Harvard Law Review

"A sophisticated and insightful analysis of American constitutional theory and the development of law as the expression of that theory within a conceptual structure rooted in the understanding of empire."--Register of the Kentucky Historical Society