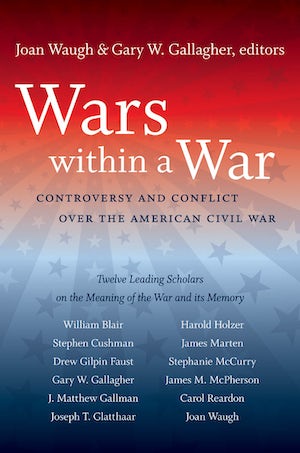 Joan Waugh is professor of history at the University of California, Los Angeles, and coeditor of the award-winning The Memory of the Civil War in American Culture.
For more information about Joan Waugh, visit the Author Page.

Gary W. Gallagher is John L. Nau III Professor in the History of the American Civil War at the University of Virginia. His most recent book is Causes Won, Lost, and Forgotten: How Hollywood and Popular Art Shape What We Know about the Civil War.
For more information about Gary W. Gallagher, visit the Author Page.

"Like a brisk wind blowing away the dust from the archives and preconceived notions. . . . Remarkable."--The Advocate

"Provide[s] a starting point for anyone interested in how Americans have argued about the prosecution, meaning, and memory of war. This is an excellent book that will leave the reader with something to ponder."--The Lone Star

"The essays . . . are skillfully, often elegantly, composed. . . . Taken together, the pieces succeed in meeting the intent of the volume's editors to suggest 'some of the many forms of conflict that arose among civilians, soldiers, politicians, and military leaders during the war.'"--America's Civil War

"Provides fresh interpretations. . . . Demonstrates the vitality of Civil War history because conflicts over the war's meaning multiply, rather than diminish, with the passage of time."--Virginia Magazine

"Detailed information and new interpretations are found in virtually every entry. . . . The reader can be assured that the research is thorough and the conclusions are balanced in this venture into a conflict that still generates dispute within and beyond the world of scholarship."--The Journal of American History