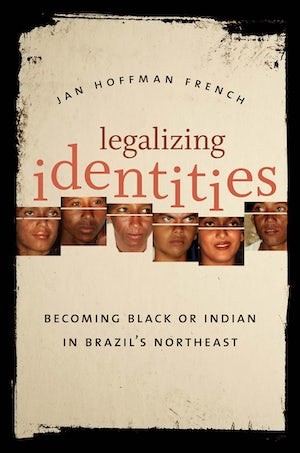 Anthropologists widely agree that identities--even ethnic and racial ones--are socially constructed. Less understood are the processes by which social identities are conceived and developed. Legalizing Identities shows how law can successfully serve as the impetus for the transformation of cultural practices and collective identity. Through ethnographic, historical, and legal analysis of successful claims to land by two neighboring black communities in the backlands of northeastern Brazil, Jan Hoffman French demonstrates how these two communities have come to distinguish themselves from each other while revising and retelling their histories and present-day stories.

French argues that the invocation of laws by these related communities led to the emergence of two different identities: one indigenous (Xocó Indian) and the other quilombo (descendants of a fugitive African slave community). With the help of the Catholic Church, government officials, lawyers, anthropologists, and activists, each community won government recognition and land rights, and displaced elite landowners. This was accomplished even though anthropologists called upon to assess the validity of their claims recognized that their identities were "constructed." The positive outcome of their claims demonstrates that authenticity is not a prerequisite for identity. French draws from this insight a more sweeping conclusion that, far from being evidence of inauthenticity, processes of construction form the basis of all identities and may have important consequences for social justice.

"Analyzes a fascinating case of identity transformation in Brazil's Northeast. . . . Provides a nuanced account of how new conditions of possibility for collective action can transform identity formations."--Journal of Latin American and Caribbean Anthropology

"Incisively engages definitional and legal questions concerning identity and indigeneity, which lie actually at the forefront of cultural anthropology today. . . . French's findings are perceptive, organized, and cast in fine-tuned prose."--Choice

"Jan French's excellent study pushes forward the challenge to traditional distinctions between blackness and indigeneity in new and challenging ways. . . . A great and intriguing book, which is required reading for people interested in racial and ethnic identities in Latin America."--Journal of the Royal Anthropological Institute

"For years, scholars have argued that racial and ethnic identities are constructed, but few have explored that process as well as Jan Hoffman French. . . . [An] important book. . . . The study's many strengths derive from Hoffman French's use of the methods and sources of cultural anthropology and social history."--The Americas

“A painstakingly detailed account of the making of new ethnicities and of what in Brazil has been called “neocommunities” in rural Brazil, where both índio-ness and negritude are contested icons undergoing a process of re-signification--from onus to bonus, from liability to asset.”--American Ethnologist

“The content is rich in detail and the narrative extremely well written, keeping the reader constantly engaged in the intricate nature of the events that culminated in the ‘ethnogenesis’ of the Xoco Indians and the quilombolas of Mocambo. . . . Required reading not just for people interested in the formation and transformation of racial and ethnic identities in Latin America, but also for anyone interested in the impact of state multiculturalism.”--Social Identities