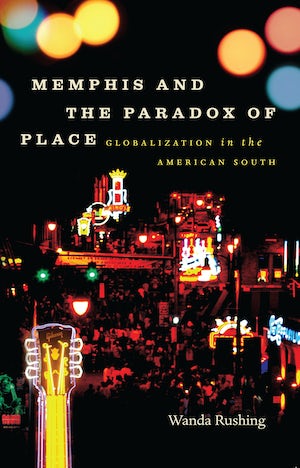 Celebrated as the home of the blues and the birthplace of rock and roll, Memphis, Tennessee, is where Elvis Presley, B. B. King, Johnny Cash, and other musical legends got their starts. It is also a place of conflict and tragedy--the site of Martin Luther King Jr.'s 1968 assassination--and a city typically marginalized by scholars and underestimated by its own residents. Using this iconic southern city as a case study, Wanda Rushing explores the significance of place in a globalizing age.

Challenging the view that globalization renders place generic or insignificant, Rushing argues that cultural and economic distinctiveness persists in part because of global processes, not in spite of them. Rushing weaves her analysis into stories about the history and global impact of blues music, the social and racial complexities of Cotton Carnival, and the global rise of FedEx, headquartered in Memphis. She portrays Memphis as a site of cultural creativity and global industry--a city whose traditions, complex past, and specific character have had an influence on culture worldwide.

Wanda Rushing is professor of sociology at the University of Memphis.
For more information about Wanda Rushing, visit the Author Page.

"Rushing has written a book that is deliberately (relatively) free of social-science jargon. . . . [Uses] a narrative, case-study approach to describe a city as complex and rich as Memphis."--Memphis Magazine

"Written in an accessible style and will be tempting to Memphis history buffs, or anyone interested in knowing more about Southern cities. . . . A fascinating overview."--Southern Register

"Rushing astutely identifies Memphis's ability to maintain its unique identity while being shaped by and operating within an increasingly global economic, political, and cultural world."--Journal of American History

"[Rushing] weaves her analysis into stories about the history and global impact of blues music, the social and racial complexities of Cotton Carnival, and the global rise of FedEx, headquartered in the city."--Abstracts of Public Administration, Development, and Environment

"[An] impressive study. . . . A welcome and programmatic work that deserves wide attention from urban sociologists, taking a big step towards redressing the woeful scholarly neglect of the Southern city in the era of globalization."--Contemporary Sociology