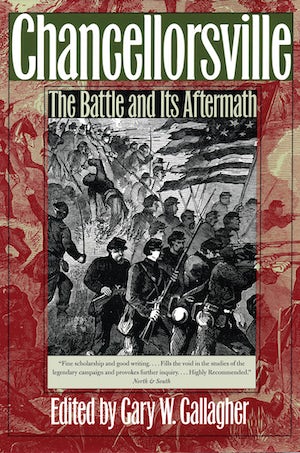 A variety of important but lesser-known dimensions of the Chancellorsville campaign of spring 1863 are explored in this collection of eight original essays. Departing from the traditional focus on generalship and tactics, the contributors address the campaign's broad context and implications and revisit specific battlefield episodes that have in the past been poorly understood.

Chancellorsville was a remarkable victory for Robert E. Lee's troops, a fact that had enormous psychological importance for both sides, which had met recently at Fredericksburg and would meet again at Gettysburg in just two months. But the achievement, while stunning, came at an enormous cost: more than 13,000 Confederates became casualties, including Stonewall Jackson, who was wounded by friendly fire and died several days later.

The topics covered in this volume include the influence of politics on the Union army, the importance of courage among officers, the impact of the war on children, and the state of battlefield medical care. Other essays illuminate the important but overlooked role of Confederate commander Jubal Early, reassess the professionalism of the Union cavalry, investigate the incident of friendly fire that took Stonewall Jackson's life, and analyze the military and political background of Confederate colonel Emory Best's court-martial on charges of abandoning his men.

Gary W. Gallagher is John L. Nau III Professor of History at the University of Virginia. His books include Causes Won, Lost, and Forgotten: How Hollywood and Popular Art Shape What We Know about the Civil War (UNC Press).
For more information about Gary W. Gallagher, visit the Author Page.

"Gallagher . . . approaches Civil War battles differently. . . . He has assembled experts to address specific subjects. . . . And their subjects are challenging and varied."--The Washington Times

"An . . . important analysis of the Civil War as portrayed by the country's cultural historians--filmmakers and artists. . . . Highly Recommended"--Choice

"A fascinating and informative book. . . . Highly recommended to students of the Civil War and Civil War enthusiasts who are looking for an examination of the misinformation that movies and art present."--Curled Up with a Good Book

"The Shenandoah Valley Campaign of 1862 is marked by fine scholarship and good writing. . . . Fills the void in the studies of the legendary campaign and provokes further inquiry. . . . Highly Recommended."--North & South

“Chancellorsville is a valuable addition to the historiography and should be mandatory reading for all students of the Civil War.”--History: Reviews of New Books