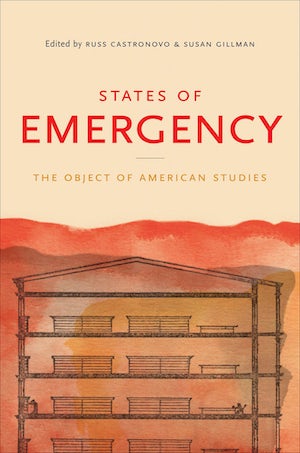 The contributors to this volume argue that for too long, inclusiveness has substituted for methodology in American studies scholarship. The ten original essays collected here call for a robust comparativism that is attuned theoretically to questions of both space and time.

States of Emergency asks readers to engage in a thought experiment: imagine that you have an object you want to study. Which methodologies will contextualize and explain your selection? What political goals are embedded in your inquiry? This thought experiment is taken up by contributors who consider an array of objects--the weather, cigarettes, archival material, AIDS, the enemy, extinct species, and torture. The essayists recalibrate the metrics of time and space usually used to measure these questions. In the process, each contributes to a project that redefines the object of American studies, reading its history as well as its future across, against, even outside the established grain of interdisciplinary practice.

Russ Castronovo is Jean Wall Bennett Professor of English and American Studies at the University of Wisconsin-Madison.
For more information about Russ Castronovo, visit the Author Page.

Susan Gillman is professor of literature and American studies at the University of California, Santa Cruz.
For more information about Susan Gillman, visit the Author Page.

"Each essay in States of Emergency offers a fresh new approach to the deep complexity and contradictions of different ways of cognitive mapping of time, space, and culture. The collection combines broad theoretical ambition with careful analyses situated in specific times and places. It offers exemplary models of how to do new and better scholarship that is fully cognizant of the enormous ethical and political responsibilities that scholarship entails."--George Lipsitz, University of California at Santa Barbara