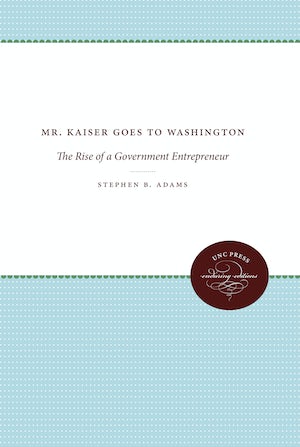 In the 1940s, the name Henry J. Kaiser was magic. Based on the success of his shipyards, Kaiser was hailed by the national media as the force behind a 'can-do' production miracle and credited by the American public with doing more to help President Roosevelt win World War II than any other civilian. Kaiser also built an empire in construction, cement, magnesium, steel, and aluminum--all based on government contracts, government loans, and changes in government regulations. In this book, Stephen Adams offers Kaiser's story as the first detailed case study of 'government entrepreneurship.' Taking a fresh look at the birth of modern business-government relations, he explores the symbiotic connection forged between FDR and Kaiser. Adams shows that while Kaiser capitalized on opportunities provided by the growth of the federal government, FDR found in Kaiser an industrial partner whose enterprises embodied New Deal goals. The result of a confluence of administration policy and entrepreneurial zeal, Kaiser's dramatic rise illustrates the important role of governmental relations in American entrepreneurial success.

Stephen B. Adams received his Ph.D. in history from Johns Hopkins University. He is currently at work on a history of the Western Electric Company.
For more information about Stephen B. Adams, visit the Author Page.

“Adams has written an important book. He probed in depth issues that others, myself included, passed over lightly. He presents his arguments clearly and convincingly. Adams’s research is impressive; he has consulted the important manuscript collections, and he interviewed virtually every available key player. Equally important, he consulted all relevant secondary source literature, providing a useful, sophisticated conceptual framework. Finally, the book is logically organized and well written, mercifully free of jargon.”--Journal of American History

"A case study of government entrepreneurship, this fascinating book provides an excellent introduction to government-business relations at that point in time when the federal government became a major purchaser of goods and services."--Choice

"Adams focuses on the relationship between the government and Henry Kaiser, noted shipbuilder during World War II. . . . Adams argues that Kaiser took advantage of the situation to become a government entrepreneur during the period. . . . Recommended."--Library Journal

"Adams does an excellent job of recounting the history of Kaiser's economic rise. More important, by developing his argument that Kaiser exemplifies a new type of economic figure--the 'government entrepreneur'--he sheds light on the interface between government and private enterprise during the Roosevelt years and also on the workings of the government itself."--Naomi R. Lamoreaux, University of California, Los Angeles

"For his case study of a government entrepreneur, Adams could scarcely have found a better figure than Henry J. Kaiser. A promoter of absolutely dazzling ability and breathtaking audacity, Kaiser developed what Adams calls a symbiotic relationship with Roosevelt's New Dealers, translating their ideologically framed goals into business reality. Adams's study is an exceptionally valuable addition to the history of American business and of the New Deal."--Diana Davids Olien, University of Texas of the Permian Basin