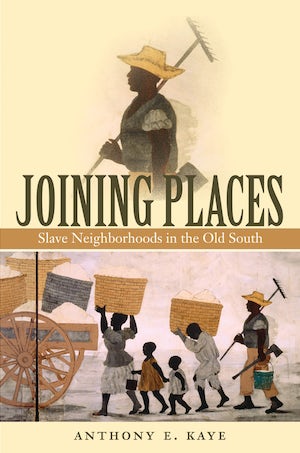 In this new interpretation of antebellum slavery, Anthony Kaye offers a vivid portrait of slaves transforming adjoining plantations into slave neighborhoods. He describes men and women opening paths from their owners' plantations to adjacent farms to go courting and take spouses, to work, to run away, and to otherwise contend with owners and their agents. In the course of cultivating family ties, forging alliances, working, socializing, and storytelling, slaves fashioned their neighborhoods into the locus of slave society.

Joining Places is the first book about slavery to use the pension files of former soldiers in the Union army, a vast source of rich testimony by ex-slaves. From these detailed accounts, Kaye tells the stories of men and women in love, "sweethearting," "taking up," "living together," and marrying across plantation lines; striving to get right with God; carving out neighborhoods as a terrain of struggle; and working to overthrow the slaveholders' regime. Kaye's depiction of slaves' sense of place in the Natchez District of Mississippi reveals a slave society that comprised not a single, monolithic community but an archipelago of many neighborhoods. Demonstrating that such neighborhoods prevailed across the South, he reformulates ideas about slave marriage, resistance, independent production, paternalism, autonomy, and the slave community that have defined decades of scholarship.

"By reconceptualizing slaves as living within complex, shifting, historically and spatially specific 'neighborhoods,' Joining Places suggests a promising way out of the increasingly unproductive historiographical impasse between slaves' agency and masters' power. . . . Throughout, Kaye's painstaking examination of his subjects' language leads to new insights."--Journal of American History

"Eloquently shows the significance of neighborhoods in the ante-bellum South."--Journal of Southern History

"One of the best books on American slavery to appear in recent years. . . . Scholars have written about these themes for years, but never with Kaye's mixture of empirical depth, stylistic grace, and theoretical sophistication."--Civil War History

"Joining Places offers a new approach to familiar questions about the character of slave society and community. . . . [It] demonstrates how 'neighborhood' shaped slaves' work and socialization, their creation of marriage and family ties, and the resistance they offered to slaveholders and the slave regime."--Frederick Douglass Book Prize Committee

"A finely detailed and richly documented narrative. . . . This volume can be expected to have wide-ranging influence on the future study of the lives of the enslaved and the plantation economy that held them in bondage."--Journal of the Early Republic

"Virtually an anatomy of the roots of neighborhood in southern communities in the U.S. South. . . . Suitable and highly recommended."--Multicultural Review