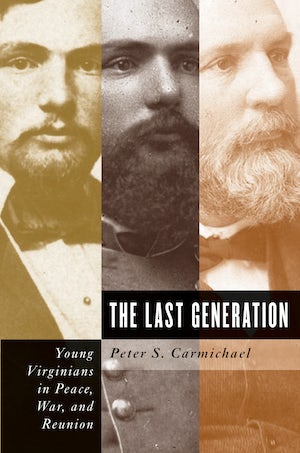 Challenging the popular conception of Southern youth on the eve of the Civil War as intellectually lazy, violent, and dissipated, Peter S. Carmichael looks closely at the lives of more than one hundred young white men from Virginia's last generation to grow up with the institution of slavery. He finds them deeply engaged in the political, economic, and cultural forces of their time. Age, he concludes, created special concerns for young men who spent their formative years in the 1850s.

Before the Civil War, these young men thought long and hard about Virginia's place as a progressive slave society. They vigorously lobbied for disunion despite opposition from their elders, then served as officers in the Army of Northern Virginia as frontline negotiators with the nonslaveholding rank and file. After the war, however, they quickly shed their Confederate radicalism to pursue the political goals of home rule and New South economic development and reconciliation. Not until the turn of the century, when these men were nearing the ends of their lives, did the mythmaking and storytelling begin, and members of the last generation recast themselves once more as unreconstructed Rebels.

By examining the lives of members of this generation on personal as well as generational and cultural levels, Carmichael sheds new light on the formation and reformation of Southern identity during the turbulent last half of the nineteenth century.

"Carmichael's book is an important vehicle for understanding the relationship between proslavery thought in higher education and the Civil War."--Reviews in American History

"[Carmichael] contributes significantly to ongoing debates about southern identity, secession, and social, cultural, and ideological continuity across the tumultuous years of Civil War and Reconstruction. . . . Carmichael's engaging study reminds us that there were many versions of southern manliness and honor and many roads to secession."--Journal of American History

"Carmichael's look at Virginia's 'last generation'--men born between 1830 and 1842, who grew up with the institution of slavery and reached political maturity during the intra-party convulsions of the 1850s--offers a . . . complex and multifaceted understanding. . . . His work will stand as a compelling description of the motivations and mentalities of the men who clamored loudest for Virginia's entry into the war, and then labored hardest to pull it out of the wreckage."--Civil War Times

"Deeply researched and well-argued. . . . This well-written and sensitively argued study should be required reading for all scholars of Southern history and the Civil War."--Journal of Military History

"Peter S. Carmichael provides an important contribution to both subfields [social and military history] and in doing so enhances the reader's appreciation of the Civil War as the nation's seminal event."--American Historical Review

"Using a generational approach to study the motivations and actions of the South's most diehard defenders, Carmichael both enlightens and entertains."--North and South