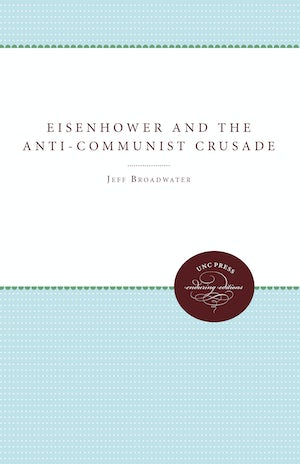 Jeff Broadwater provides a comprehensive survey of the Eisenhower administration's response to America's postwar Red Scare. He looks beyond Senator Joseph McCarthy's confrontations with Eisenhower to examine the administration's own anti-Communist crusade. Exploring the complex relationship between partisan politics and cold war tensions, Broadwater demonstrates that virulent anticommunism, as well as opposition to it, often cut across party and ideological lines. He shows, moreover, that although McCarthy and his allies captured the headlines, ultimately it was the Eisenhower administration that bore responsibility for implementing most of the nation's anti-Communist policies.

The book begins with an overview of the debate over internal security following World War II and then examines Eisenhower's record on the issue. Broadwater asserts that at the outset of the cold war, Eisenhower assumed a moderate stance, defending some of McCarthy's targets and cooperating as NATO commander with European Socialist leaders. Later, as a presidential candidate under pressure from Republicans conservatives, he moved steadily toward the right. Once in the Oval Office, he embraced much of the anit-Communist agenda and shared many of the McCarthyites' fears about internal security, supporting, for example, the federal employee security program and the legal persecution of the Communist party.

Broadwater concludes that while Eisenhower personally despised McCarthy and eventually presided over the end of the Red Scare, the president was also a committed anti-Communist who frequently displayed little concern for American civil liberties.

Jeff Broadwater is professor of history at Barton College and author of George Mason, Forgotten Founder.


For more information about Jeff Broadwater, visit the Author Page.

"Despite the enormous literature on McCarthyism and the Red Scare of the late 1940s and 1950s, Broadwater is the first person to examine the issue of Eisenhower and Anti-Communism in a systematic and comprehensive manner. I am impressed by how intelligent and well written this study is. It represents another significant contribution to the still-growing literature on the Eisenhower presidency."--Burton I. Kaufman, Virginia Polytechnic Institute and State University