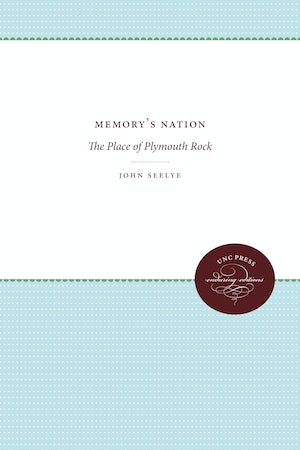 Long celebrated as a symbol of the country's origins, Plymouth Rock no longer receives much national attention. In fact, historians now generally agree that the Pilgrims' storied landing on the Rock never actually took place--the tradition having emerged more than a century after the arrival of the Mayflower.

In Memory's Nation, however, John Seelye is not interested in the factual truth of the landing. He argues that what truly gives Plymouth Rock its significance is more than two centuries of oratorical, literary, and artistic celebrations of the Pilgrims' arrival. Seelye traces how different political, religious, and social groups used the image of the Rock on behalf of their own specific causes and ideologies. Drawing on a wealth of speeches, paintings, and popular illustrations, he shows how Plymouth Rock changed in meaning over the years, beginning as a symbol of freedom evoked in patriotic sermons at the start of the Revolution and eventually becoming an icon of exclusion during the 1920s.

John Seelye is Graduate Research Professor of American Literature at the University of Florida in Gainesville. He is author of a number of books in the field of American studies, including two volumes on the role of rivers in opening and permitting communications between the territories that became the United States.
For more information about John Seelye, visit the Author Page.

"[Seelye] says flatly that the Plymouth Rock legend was a myth, but charts how the myth evolved over the years--in paintings, literature and public speeches--and how various political and social movements (especially abolition) made use of it. The book is rich, even lavish, in its detail . . . on subjects that range from early New England patriotic iconography . . . to the rivalry between Plymouth and Provincetown over Pilgrim bragging rights, to how the Rock itself has been displayed over the centuries."--Publishers Weekly

"An extensive and often entertaining study of the place of Plymouth Rock in the national memory."--Boston Globe

"Seelye’s canvas is both sweeping and subtle. . . . Theoretically sophisticated and deeply researched, this splendid account is both unassuming and ambitious. It offers a gold mine of information for all students of American intellectual and social history."--Choice

"Seelye's survey of the multiple meanings of Plymouth Rock is stippled with keen insights and wry ironies that make for fascinating reading. Equally enlightening is his account of Plymouth Rock's evolution as a shrine and tourist attraction."--Christian Science Monitor

"Memory's Nation by John Seelye is a rich and enormously detailed study of the idea of Plymouth Rock in American cultural and political life."--AB Bookman's Weekly

"The most powerful demonstration of the constructed character of American origins published in recent memory."--Early American Literature