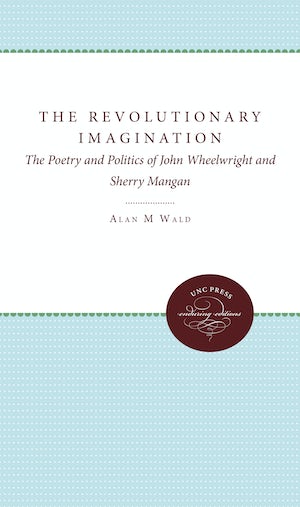 In this study of two neglected New England poets, Alan Wald challenges the literary culture that has obscured the radical and Marxist heritage of American letters in our century. "Simply by aspiring to accurate historical remembrance," Wald writes, "this book aims to subvert the currently sanctified canon of letters and the vision of society legitimized by its codification."

John Wheelwright (1897-1940) and Sherry Mangan (1904-1961) were Harvard-educated, avant-garde poets in the 1920s. Influenced by Leon Trotsky, they became revolutionaries during the Great Depression. In this first book to examine the relationship in the United States between modernist poets and Marxist politics, Wald demonstrates that Wheelwright and Mangan defy -- in their personalities and in their literary styles, themes, and achievements -- standard depictions of socialist writers in the 1930s. Wald uses a contemporary Marxist approach of his own to extend the study of American literary radicalism into such areas as the formal features of leftist poetry in the United States, how modernism and Marxism are related, and what happened to the recalcitrant 1930s radicals during the Cold War period.

John Ashbery has called Wheelwright's Collected Poems one of the 100 most important books of Western literature of the last thirty-five years. Scholars, however, have virtually ignored Wheelwright. A leader of the Harvard Poetry Society in the post-World War I era, Wheelwright was also an architectural historian, heterodox Anglican, and highly unconventional Boston Brahmin. Before he was killed in a car accident in 1940, Wheelwright had established himself as a legendary figure among Boston-area writers. Wald argues that Wheelwright succeeded in resolving for himself the fundamental paradox faced by the modernist poet who is also a radical -- the urge to write poems that are complex and therefore objectively elitist and the desire to use art to influence the attitudes of a mass audience.

Also educated at Harvard, Mangan was a passionate and scholarly classicist. He made a small but distinct mark on American literature in the late 1920s and early 1930s as a poet, novelist, short story writer, critic, editor, and book designer. By the end of the depression, however, he had remade his life, exiling himself to Western Europe and Latin America, where he worked as a journalist for Time, Life, and Fortune and carried out political missions for the Trotskyist Fourth International. Wald concludes that Mangan's writing after the mid-1930s became either impenetrable in its obscure personal symbolism or conventionally realistic.

Alan M. Wald is the H. Chandler Davis Collegiate Professor of English Literature and American Culture at the University of Michigan and is the recipient of the Mary C. Turpie Prize of the American Studies Association.

"Breaks fresh ground by opening the debate on the whole nature of a political aesthetic in poetry and proposes new solutions to the problems of the analysis of committed verse. It represents an important contribution to a long-needed radical revision of the American literature of the 1930s and 40s."--Fredric Jameson

"Wald's book, despite some theoretical heavy weather at the beginning, is not tendentious. Its aim is to counter present amnesia about the relationship of literature and leftist politics between the two world wars, and it contributes a wealth of fact and recovered ideas to that end."--Peter Schjeldahl, New York Times Book Review