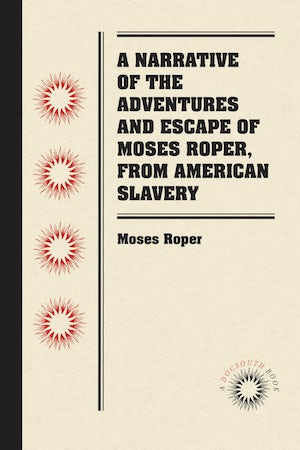 The Narrative of the Adventures and Escape of Moses Roper can be read as an extended autobiographical meditation on the meaning of race in antebellum America. First published in England, the text documents the life of Moses Roper, beginning with his birth in North Carolina and chronicling his travels through South Carolina, Georgia, and Florida. Roper was able to obtain employment on a schooner named The Fox, and in 1834 he made his way to freedom aboard the vessel. Once in Boston, he was quickly recruited as a signatory to the constitution of the American Anti-Slavery Society (AASS), but he sailed to England the next year. Roper's narrative is especially interesting because although it was published after Frederick Douglass's much-heralded 1845 Narrative, Roper actually preceded Douglass in his involvement in AASS as well as in his travel to the United Kingdom. This text is often cited by literary scholars because of its length, its extensive detail, and its unforgiving portrayal of enslaved life in the "land of the free."

Moses Roper was born in 1815 in Caswell County, North Carolina, the son of a white planter (Henry) and his house slave (Nancy). He went on to challenge the racial logic of slavery, and his 1837 autobiography repeatedly sold out, necessitating ten reprintings in the two decades after its publication.
For more information about Moses Roper, visit the Author Page.