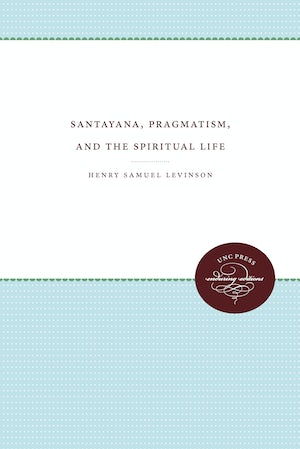 Henry Levinson offers a major reinterpretation of the Spanish-born American philosopher George Santayana (1863-1952), which highlights his relationship to the tradition of American pragmatism. He shows that Santayana's role in forming the pragmatist tradition was greater than has usually been recognized and that Santayana has much to offer contemporary pragmatists.

Levinson puts Santayana at the forefront of pragmatism by emphasizing his reflections on the cultural structures that shape human life and expression. He explores Santayana's interest in solitude and society, his poetic construals of religious thought and ritual, his institutional rendition of pragmatism, and his concern to distinguish spirituality and politics. In doing so, he gives attention to Santayana's precursors, like Ralph Waldo Emerson; to his teachers and colleagues, including William James and Josiah Royce; to other pragmatists of his time, such as John Dewey and Sidney Hook; and to contemporary writers, including Richard Rorty and Milan Kundera.

Levinson's book illuminates an area neglected in both American literary history and the history of pragmatism. No other book has so carefully and centrally focused on the development of Santayana's scholarship, and no other author captures the way in which Santayana's concern with spirituality connects his earlier and later works.

"Fills a glaring gap in Romantic criticism, with the first full-length treatment of that common Romantic fact, or fashion, the self-conscious fragment."--Keats-Shelley Journal

"This work will cause many to reconsider the traditional rendering of Santayana and of much of the pragmatic movement. . . . In terms of highlighting the distinctive contributions of Santayana to American pragmatism, Levinson's account is a singular contribution to scholarship."--Herman Saatkamp, Jr., general editor, The Works of George Santayana

"This splendid book is not only a major reinterpretation of Santayana, it is also a powerful challenge to our assumptions about American pragmatism. Henceforth, anyone who neglects Santayana when telling the story of pragmatism, anyone who accepts Hook's anti-religious arguments and tragic vision as definitive of pragmatic naturalism, will have to answer to Levinson. It is surely one of the most important books on a single figure to have been written by a specialist in religious studies for a long time."--Jeffrey Stout, Princeton University