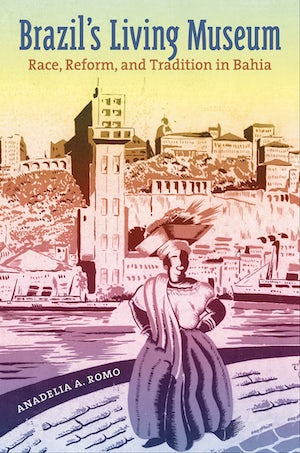 To purchase online via an independent bookstore, visit Bookshop.org
Brazil's northeastern state of Bahia has built its economy around attracting international tourists to what is billed as the locus of Afro-Brazilian culture and the epicenter of Brazilian racial harmony. Yet this inclusive ideal has a complicated past. Chronicling the discourse among intellectuals and state officials during the period from the abolition of slavery in 1888 to the start of Brazil's military regime in 1964, Anadelia Romo uncovers how the state's nonwhite majority moved from being a source of embarrassment to being a critical component of Bahia's identity.

Romo examines ideas of race in key cultural and public arenas through a close analysis of medical science, the arts, education, and the social sciences. As she argues, although Bahian racial thought came to embrace elements of Afro-Brazilian culture, the presentation of Bahia as a "living museum" threatened by social change portrayed Afro-Bahian culture and modernity as necessarily at odds. Romo's finely tuned account complicates our understanding of Brazilian racial ideology and enriches our knowledge of the constructions of race across Latin America and the larger African diaspora.

Anadelia A. Romo is assistant professor of history at Texas State University-San Marcos.
For more information about Anadelia A. Romo, visit the Author Page.

"Romo takes up the banner of regional studies while injecting new life into the genre. . . . Romo's prose is clear and concise. . . . Historians as well as other social scientists, such as anthropologists, will find this work useful and rewarding. Recommended."--Choice

"A well organized and clearly written book that adds to the extensive scholarship in the field and contributes to a better understanding of the intellectual discourses on race. . . . Succeeds in showing how the promotion of Bahia's African roots was not only a project developed by people of African descent but part of a long process that was also embraced and sometimes led by white Bahian intellectual elites and U.S. scholars."--The Americas

“A well-researched, well written and absorbing book….The answer to Romo’s concerns can be found in the very pages of her excellent book….Romo had already hit the nail on the head when she acknowledged, in the opening pages, that demography is not destiny.”--A Contrecorriente

“[This book] will provide students and professors with a depth and breadth of knowledge about intellectual and religious trends critical to the study of twentieth-century Brazil.”--Latin American Research Review

“Romo’s contribution is to elucidate the complex Bahian political and intellectual debate that resulted in the revalorization of Afro-Bahian culture.”--Canadian Journal of History

"It is an admirable contribution to Brazilian history, to discussions of historical memory, and to our understanding of the relationship between race and nation in the Atlantic world."--American Historical Review