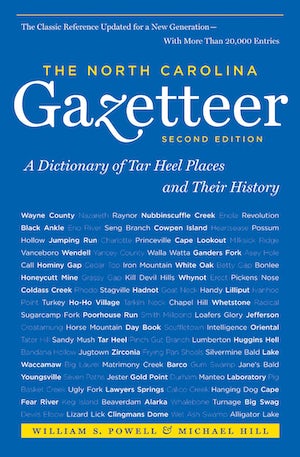 The North Carolina Gazetteer first appeared to wide acclaim in 1968 and has remained an essential reference for anyone with a serious interest in the Tar Heel State, from historians to journalists, from creative writers to urban planners, from backpackers to armchair travelers.

This revised and expanded edition adds approximately 1,200 new entries, bringing to nearly 21,000 the number of North Carolina cities, towns, crossroads, waterways, mountains, and other places identified here. The stories attached to place names are at the core of the book and the reason why it has stood the test of time. Some recall faraway places: Bombay, Shanghai, Moscow, Berlin. Others paint the locality as a little piece of heaven on earth: Bliss, Splendor, Sweet Home. In many cases the name derivations are unusual, sometimes wildly so: Cat Square, Huggins Hell, Tater Hill, Whynot.

Telling us much about our own history in these snapshot histories of particular locales, The North Carolina Gazetteer provides an engaging, authoritative, and fully updated reference to place names from all corners of the Tar Heel State.

"One can't get all this information anywhere else. . . . The book is practically a 'must' for anyone interested in the state's geography or history."--North Carolina Historical Review

"A useful book that every statewide [political] candidate should carry in the front seat of the car."--Chapel Hill News

"There is no state glossary for the Atlantic Seaboard (possibly anywhere) that can compare in quality with Bill Powell's glossary of North Carolina."--Raven I. McDavid Jr., University of Chicago