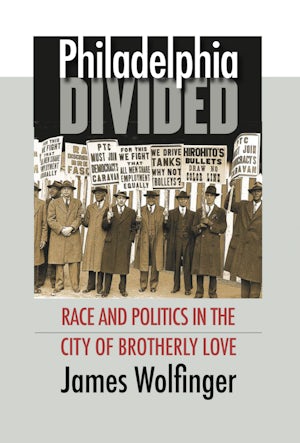 In a detailed study of life and politics in Philadelphia between the 1930s and the 1950s, James Wolfinger demonstrates how racial tensions in working-class neighborhoods and job sites shaped the contours of mid-twentieth-century liberal and conservative politics. As racial divisions fractured the working class, he argues, Republican leaders exploited these racial fissures to reposition their party as the champion of ordinary white citizens besieged by black demands and overwhelmed by liberal government orders.

By analyzing Philadelphia's workplaces and neighborhoods, Wolfinger shows the ways in which politics played out on the personal level. People's experiences in their jobs and homes, he argues, fundamentally shaped how they thought about the crucial political issues of the day, including the New Deal and its relationship to the American people, the meaning of World War II in a country with an imperfect democracy, and the growth of the suburbs in the 1950s. As Wolfinger demonstrates, internal fractures in New Deal liberalism, the roots of modern conservatism, and the politics of race were all deeply intertwined. Their interplay highlights how the Republican Party reinvented itself in the mid-twentieth century by using race-based politics to destroy the Democrats' fledgling multiracial alliance while simultaneously building a coalition of its own.

James Wolfinger is associate professor of history and education at DePaul University.
For more information about James Wolfinger, visit the Author Page.

"[An] engrossing social history of early 20th-century Philadelphia politics. . . . A tremendous contribution to our knowledge of how racism shaped politics in the urban North."--Journal of African American History

"[A] thorough exploration of the topic. . . . Deftly shows how the racist fear-mongering politics of the 1930s-50s has shaped our current political system."--Colorlines

"An in-depth analysis of the lives and politics of Philadelphia's various racial and ethnic groups between the 1930s and 1950s. . . . Wolfinger's book deserves to be praised."--Pennsylvania Magazine of History and Biography

"Achieves notable success with its exploration of the intersections of race and ideology and its linkage of urban political and social history. . . . A major addition not just to the rapidly growing historiography of twentieth-century Philadelphia, but to the fields of social, political, and urban history more generally."--Journal of Social History

"Wolfinger's book is a significant addition to the burgeoning literature on race, politics, and metropolitanization in the United States following World War II. . . . [A] richly informative and finely detailed account."--American Historical Review