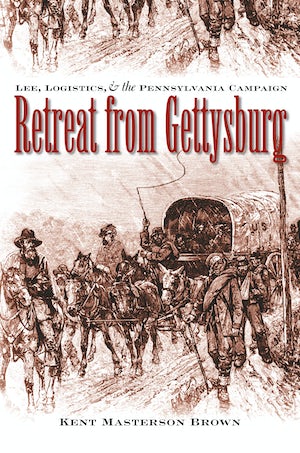 In a groundbreaking, comprehensive history of the Army of Northern Virginia's retreat from Gettysburg in July 1863, Kent Masterson Brown draws on previously untapped sources to chronicle the massive effort of General Robert E. Lee and his command as they sought to move people, equipment, and scavenged supplies through hostile territory and plan the army's next moves. Brown reveals that even though the battle of Gettysburg was a defeat for the Army of Northern Virginia, Lee's successful retreat maintained the balance of power in the eastern theater and left his army with enough forage, stores, and fresh meat to ensure its continued existence as an effective force.

Kent Masterson Brown is an attorney in Lexington, Kentucky. He is author of Cushing of Gettysburg: The Story of a Union Artillery Commander and editor of The Civil War in Kentucky.
For more information about Kent Masterson Brown, Esq., visit the Author Page.

"An immensely important read for anyone with a serious interest in the war."--The NYMAS Review

"Captures the reader from beginning to end. . . . Should be in the library of every serious student and scholar of Civil War history."--Pennsylvania Magazine of History and Biography

"A who's who of Civil War historiography."--West Virginia History

"The result of these years of research and contemplation is an original book that for the first time provides an overview of Lee's masterful retreat from his worst battlefield defeat. . . . [For] Gettysburg buffs, as well as those interested in military logistics, retreat theory, the Army of Northern Virginia, and the Civil War in general."--Civil War News

"Beyond being a great read, Retreat from Gettysburg is exceptionally well researched. . . . Such skillful use of these primary sources provides the reader with probably the best account to date of a Civil War army's retreat after a major battle."--North & South