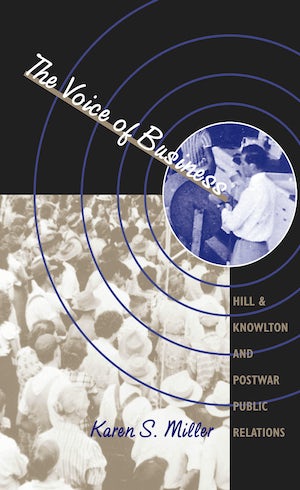 In 1933, John W. Hill opened the New York office of what would

become the most important public relations agency in history:

Avco Manufacturing as well as the steel, tobacco, and aviation

industries' trade associations--amounted to 10 percent of the

& Knowlton's influence on American public discourse in the

discussion about issues important to its clients and to educate

Americans about big business. Karen Miller shows how the agency

media content about such issues as postwar military aircraft

Truman's seizure of steel mills in 1952, and the cigarette health

scare of 1953-54. Though its campaigns did not change many

indirectly by reinforcing the ideas of its clients and other

Karen S. Miller is assistant professor at the University of Georgia in Athens, where she teaches public relations and media history.
For more information about Karen S. Miller, visit the Author Page.

"Avoiding narrow institutional history, Karen Miller has written a good study of what was for many years the largest and most respected public relations agency. . . . The book makes a valuable contribution by explaining the public side of business."--Journal of American History

"Miller’s in-depth look at one firm’s campaigns succeeds in creating a more balanced picture of a public relations firm’s operation and impact, as well as its limited influence over public opinion. . . . This book fills an important niche in the history of public relations and demands the attention of scholars in the fields of business, education, journalism, and American culture."--History of Education Quarterly

"A good book covers a single topic well; an excellent one brings us into the world around it. Such is the case with The Voice of Business. . . . Insightful and entertaining. . . . A model of historiography."--Journalism and Mass Communication Quarterly

"One of the few studies of PR firms and surely the best."--Choice

"This study of Hill & Knowlton, the pioneering PR firm, shrewdly assesses what public relations can and cannot do. Karen Miller achieves insights both revealing and entertaining into some telling moments of twentieth-century American public discourse--the 1952 seizure of the steel mills, the campaign for a vast Air Force, the war of butter versus oleo, and the early smoking-causes-cancer debate."--Richard M. Fried, University of Illinois at Chicago