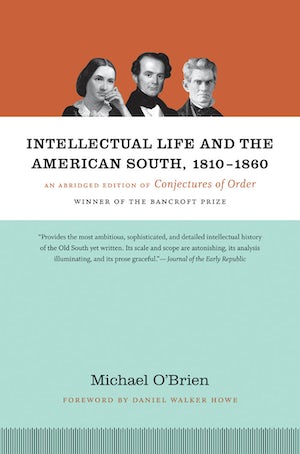 Michael O'Brien has masterfully abridged his award-winning two-volume intellectual history of the Old South, Conjectures of Order, depicting a culture that was simultaneously national, postcolonial, and imperial, influenced by European intellectual traditions, yet also deeply implicated in the making of the American mind.

Here O'Brien succinctly and fluidly surveys the lives and works of many significant Southern intellectuals, including John C. Calhoun, Louisa McCord, James Henley Thornwell, and George Fitzhugh. Looking over the period, O'Brien identifies a movement from Enlightenment ideas of order to a Romanticism concerned with the ambivalences of personal and social identity, and finally, by the 1850s, to an early realist sensibility. He offers a new understanding of the South by describing a place neither monolithic nor out of touch, but conflicted, mobile, and ambitious to integrate modern intellectual developments into its tense and idiosyncratic social experience.

"An astonishing book. Beautifully written and meticulously researched, it chronicles the lives, thoughts, and varying fortunes of intellectuals in the Old South from early in the nineteenth century up to the Civil War. . . . Michael O'Brien addresses not only what rendered Southern thinking distinctive, but the entire tapestry of intellectual life as it was conducted in the Old South."--Times Literary Supplement

"Tightly argued, well written, and well documented. . . . With skillful acknowledgment of the intellectual ties to the transatlantic world, O'Brien manages to document the intellectual life of the region even as he shows how regional writers and thinkers helped give meaning to the South. . . . Should have a place in the libraries of all who would understand the prewar South. . . . Highly recommended."--Choice

"A deeply impressive effort. It will stand as one of the most important books in antebellum Southern intellectual life for a long time."--Civil War History

"A great achievement. It is hard to imagine anyone matching it for depth, scope and subtlety of analysis as a whole or in its parts."--Journal of American Studies

"Provides the most ambitious, sophisticated, and detailed intellectual history of the Old South yet written. Its scale and scope are astonishing, its analysis illuminating, and its prose graceful."--Journal of the Early Republic

"[O'Brien's] narrative [has] the density of experience and the sense of individuals swept up by change more usually found in great fiction than in even the best histories. [A] magisterial work of investigation and recovery. . . . From this point forward, it will be impossible to write about any aspect of antebellum intellectual life without reference to it."--American Scholar