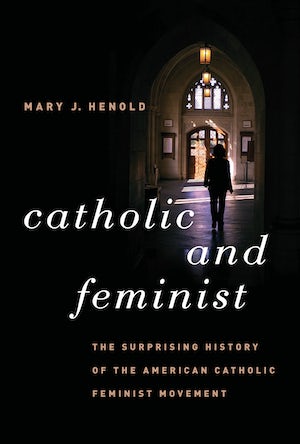 In 1963, as Betty Friedan's Feminine Mystique appeared and civil rights activists marched on Washington, a separate but related social movement emerged among American Catholics, says Mary Henold. Thousands of Catholic feminists--both lay women and women religious--marched, strategized, theologized, and prayed together, building sisterhood and confronting sexism in the Roman Catholic Church. In the first history of American Catholic feminism, Henold explores the movement from the 1960s through the early 1980s, showing that although Catholic feminists had much in common with their sisters in the larger American feminist movement, Catholic feminism was distinct and had not been simply imported from outside.

Catholic feminism grew from within the church, rooted in women's own experiences of Catholicism and religious practice, Henold argues. She identifies the Second Vatican Council (1962-65), an inspiring but overtly sexist event that enraged and exhilarated Catholic women in equal measure, as a catalyst of the movement within the church. Catholic feminists regularly explained their feminism in terms of their commitment to a gospel mandate for social justice, liberation, and radical equality. They considered feminism to be a Christian principle.

Yet as Catholic feminists confronted sexism in the church and the world, Henold explains, they struggled to integrate the two parts of their self-definition. Both Catholic culture and feminist culture indicated that such a conjunction was unlikely, if not impossible. Henold demonstrates that efforts to reconcile faith and feminism reveal both the complex nature of feminist consciousness and the creative potential of religious feminism.

"Compelling reading. . . . Provides a lively, cohesive narrative for non-Catholic feminists and readers from Generation O. . . . This concise, lively, carefully prepared volume will be useful to Catholics who want to know more about their own recent past and to students of American history, women's history, and religious history. . . . Highly recommended."--Choice

"An example of feminist scholarship that deserves the name: professional yet personal, documenting assertions without hedging and offering a vision that balances the real and the ideal. . . . [Henold's] scholarship is careful, her writing style clean."--America

"A splendid history of the American Catholic feminist movement. . . . Highly recommended for all seminary, academic, and public libraries."--Library Journal

"Superb . . . at tracing and analyzing the history of Catholic feminism in the United States. . . . Henold's research is impressive, relying on extensive archival research and a variety of fascinating oral histories. . . . An important contribution to the fields of religious history and women's studies and should be required reading in those areas for years to come."--American Catholic Studies

"[Henold] is to be commended for taking several thousand bits of information and weaving them into an engaging and informative narrative without masking the complexities of interpreting a period of enormous change."--Journal of American History