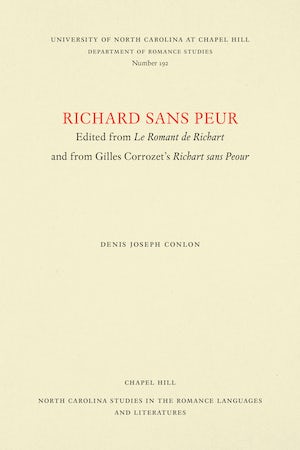 Conlon’s edition usefully places Le Romant de Richart and Corrozet’s prose adaptation Richart sans peour into one text. This composition allows Conlon to explore the connections between the first prose adaptation and its epic source, hypothesizing the rationales for each of their creations. Conlon’s introduction to the edition includes information on Richard Duke of Normandy, on later prose editions, on Corrozet, and on sources. It also provides a plot summary of both texts and linguistic commentary. He concludes his edition with an appendix of names and places, glossaries, and a bibliography.