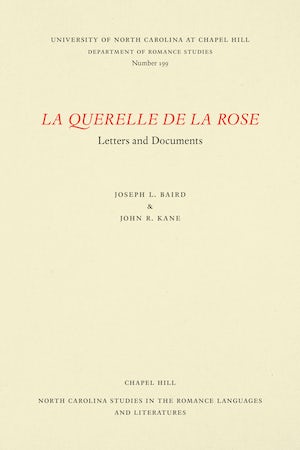 La Querelle de la Rose: Letters and Documents is an English language translation of the letters and documents written and exchanged during the literary quarrel about Roman de la Rose. It began in 1401 with a letter from Jean de Montreuil, the provost of Lille and a member of the royal chancery to Christine de Pizan, and an anonymous but notable cleric. The quarrel itself should be of interest to readers of Roman de la Rose, of Medieval French Scholars, and to scholars interested in feminism and conditions of women in Medieval France. Baird and Kane’s translation differs from other translations in that it includes Christine de Pizan’s 1399 Epistre au Dieu d’amours and that it follows the chronological order of Potansky’s 1972 German edition.