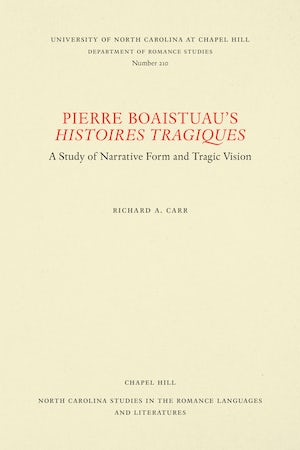 In this book, Richard A. Carr elucidates Boaistuau’s quest for a ‘nouvelle form’ in his loose adaptation of Bandello’s Novelle. Emphasizing psychological details absent in the Italian original, Carr repeatedly questions the human motives for the gruesome acts that Boaistuau selected as exempla for his readers. This book demonstrates the Boaistuau’s use of two elements generally ignored by writers of his day, the conventions of tragedy, and those of rhetoric. Carr’s discussion of his style of writing illuminates Boaistuau’s use of each accepted rhetorical device to add to the aesthetic appeal of his text without falling into the excesses that would ultimately conflict with his didactic, moralistic purpose. This text delves not only into Boaistuau’s work, but also into his character, placing him in the context of the conflict-ridden time in which he lived. The struggle between the author’s moralist stance and seeming malaise when confronted with the violence that filled his world allows entry into the limbo that is seeing the evil in mankind, but having no assurance of the infallibility of God and His Law as a means of redemption. Through this analysis, Carr offers new insights on the complexity and generic innovation of an author often accused of banal superficiality.