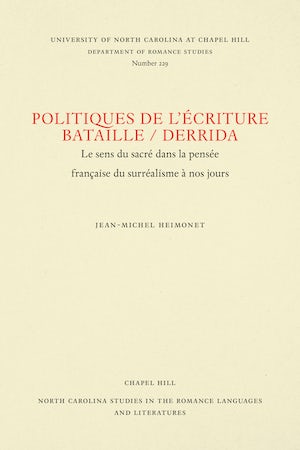 Politiques de l’écriture is a critical assessment of an important yet overlooked segment in the socio-cultural history of the interwar period. It examines in detail the function, range, and implications of “sacred sociology” as practiced by the members of the 1937 Collège de Sociologie--Bataille, Caillois, and Monnerot. Seemingly marginal figures of French letters receive individual as well as comparative attention in terms of their far-reaching impact on contemporary intellectual, epistemological, and critical issues.

Through close readings, Jean-Michael Heimonet shows how the repeated attempts in modern society and political history to create and preserve a homogeneous society, in which its members are functions rather than individuals, are severely criticized and counteracted by the members of the Collège. The history of that counteraction is itself the history of a series of important crises in the intellectual and political landscape of the mid- to late 1930s in France.