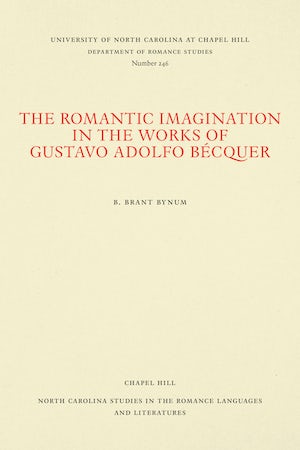 In this study, Brant Bynum reads the work of Gustavo Adolfo Bécquer (1836-70), one of the nineteenth century's finest romantic poets, in terms of a European Romanticism--one characterized by an emphasis on spirituality, subjectivity in thought and feeling, and the salience of the creative imagination. Bynum examines Bécquer's conception of spirit and poetry, and relates the creative force of imagination to Bécquer's total literary output. He argues that it is this imaginative force, supported by the framework of an international Romanticism, that grants the poet’s work to unite, transform, and mediate. Combining interpretive criticism and textual analysis, Bynum substantiates the central importance of imagination in Bécquer’s oeuvre, and the significance of the concepts of mediation and threshold. By considering Bécquer within a critical context broader than is usual, Bynum establishes additional points of reference in the theoretical foundation on which Bécquer's works rest, offering new insights into the work of this master of the poetic art.