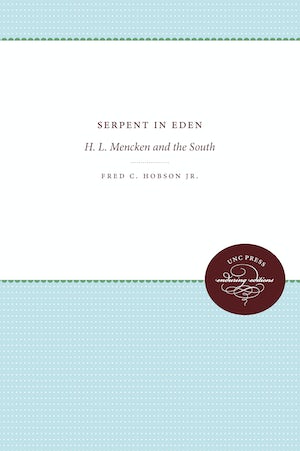 The appearance in 1920 of H. L. Mencken's scathing essay about the intellectual and cultural impoverishment of the South, "The Sahara of the Bozart", set off a firestorm of reaction in the region that continued unabated for much of the next decade. In Serpent in Eden, Mencken scholar Fred Hobson examines Mencken's love-hate relationship with the South. He explores not only Mencken's savage criticism of the region but also his efforts to encourage southern writers and the bold "little magazines", such as the Reviewer and the Double Dealer, that started up in the South during the 1920s.

Fred Hobson is professor of American literature at the University of North Carolina at Chapel Hill and co-editor of the Southern Literary Journal.
For more information about Fred C. Hobson Jr., visit the Author Page.

"It is amazing, when one thinks about it, that no one had thought of doing what Fred Hobson does in this able and entertaining essay; tracing, that is, the intriguing public and private relationship between Baltimore's 'intellectual bombardier' and southern literati of the twenties." -- Edwin M. Yoder, Jr., in the National Review

"An engrossing study of this pivotal era and of H.L. Mencken's role as Voltaire to the southern literary renaissance...By concentrating on one seemingly narrow issue, Hobson illuminates the whole inturned debate on southern tradition and values."--Times Literary Supplement