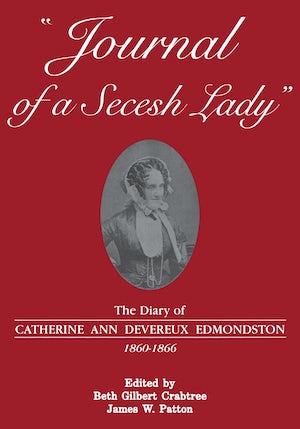 Distributed for the North Carolina Office of Archives and History

The diary of Catherine Ann Devereux Edmondston presents a unique portrait of Civil War North Carolina. Wife of a prominent planter and slaveholder in Halifax County, North Carolina, Mrs. Edmondston spent most of the war on the family plantations Hascosea and Looking Glass. Occasionally she made trips with her husband Patrick to Richmond, Virginia, and to various eastern North Carolina towns. Despite this relative isolation and insulation Kate Edmondston’s imagination and inquisitive mind allowed her to observe and follow closely the progress of the war.

An avid reader of newspapers, particularly those from the Confederate capital Richmond, she commented extensively on the war and recorded in minute detail the strategies and maneuverings of the Confederate and Union armies, casualties among North Carolina troops, and the weaknesses and strengths of various leaders, North and South, local and sectional. She also fancied herself a poet and wrote odes to various fallen heroes and to the southern war effort. One of her poems even found its way into print in a South Carolina newspaper. Clearly she was influenced by poets and novelists of the Romantic period, for her diary abound with allusions to many pieces of classical literature and the Bible.

A diehard “secesh lady,” in her own words, she was uncompromisingly prosouthern in her loyalties and intensely bitter toward Unionists, Abraham Lincoln, and northern generals like Benjamin Butler and William Sherman. Inept Confederates and southern leaders she considered undeserving political lackeys did not escape her vitriolic pen, however.

The diary reveals a rich mosaic of family, class, and sectional connections. It provides in addition an unusually intimate glimpse of plantation life and the social consequences of war as the conflict crept closer and as a miasma of fear and uncertainty enveloped eastern North Carolina. Mrs. Edmondston’s distinct and finely etched class views of nonslaveholding whites, slaves, and freedmen and her perception of the role of women in southern society undergird the entire journal. An intriguing social document in itself, the diary depicts with profound clarity the shattering impact of the war on southern women in particular, whose circumscribed lives were suddenly exposed to the ravages of war and poverty.

Characterized by new insights into the Civil War experience on the southern home front, and filled with copious data for historians and genealogists, the Edmondston diary will appeal to many readers as simply a gripping tale of southern life during the conflict. As such, it rivals some of the best-known accounts of the Civil War, including the diary of Mary Boykin Chesnut.

Beth Crabtree, a native of Raleigh, graduated from Peace and Meredith Colleges. She earned a master's degree in history from the University of North Carolina at Chapel Hill. She worked for the Division of Archives and History until her retirement in 1975.
For more information about Beth Gilbert Crabtree, visit the Author Page.

James W. Patton was director of the Southern Historical Collection at the University of North Carolina at Chapel Hill and taught in its Department of History. He was author or editor of numerous books including Women of the Confederacy. He died in 1973.
For more information about James W. Patton, visit the Author Page.