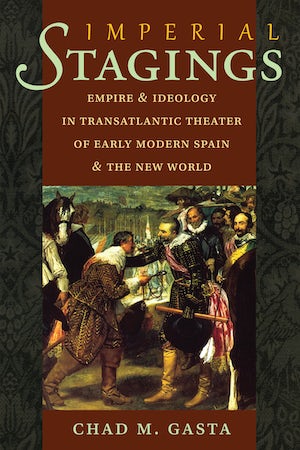 The promotion of state ideology was pervasive in early modern Spain and its New World colonies. One cultural medium affected, theater--the most popular and viable form of mass entertainment at the time--frequently played a role in the advancement of imperial rule. However, despite censorship and the state control of theaters, early modern dramatists also found novel and covert methods to criticize Spain's handling of its imperial affairs by proposing alternative solutions to the problems with which they dealt.

Imperial Stagings: Empire and Ideology in Transatlantic Theater of Early Modern Spain and the New World shows how the dramas of Lope de Vega, Juan Ruiz de Alarcón, Pedro Calderón de la Barca, and Sor Juana Inés de la Cruz confronted the economic, legal, socio-political, and religious problems of Spain and its colonies. It studies how drama, a reciprocal transatlantic phenomenon, interacted with Spanish imperial ideology as it attempted to foster the creation of a national identity.

Chad M. Gasta is professor of Spanish and chair of the department at Iowa State University, where he also serves as director of international studies and codirector of the Languages and Cultures for Professions (LCP) program.
For more information about Chad Gasta, visit the Author Page.