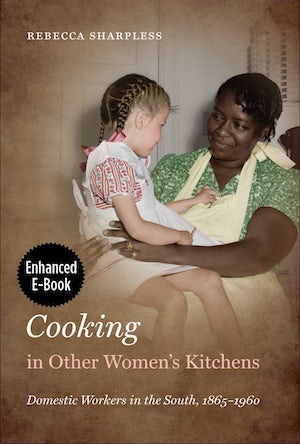 As African American women left the plantation economy behind, many entered domestic service in southern cities and towns. Cooking was one of the primary jobs they performed, feeding generations of white families and, in the process, profoundly shaping southern foodways and culture. In Cooking in Other Women's Kitchens: Domestic Workers in the South, 1865-1960, Rebecca Sharpless argues that, in the face of discrimination, long workdays, and low wages, African American cooks worked to assert measures of control over their own lives. As employment opportunities expanded in the twentieth century, most African American women chose to leave cooking for more lucrative and less oppressive manufacturing, clerical, or professional positions. Through letters, autobiography, and oral history, Sharpless evokes African American women's voices from slavery to the open economy, examining their lives at work and at home.

The enhanced electronic version of the book includes twenty letters, photographs, first-person narratives, and other documents, each embedded in the text where it will be most meaningful. Featuring nearly 100 pages of new material, the enhanced e-book offers readers an intimate view into the lives of domestic workers, while also illuminating the journey a historian takes in uncovering these stories.