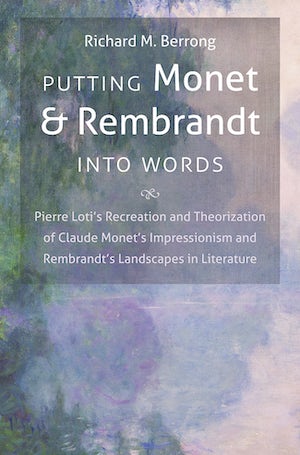 Claude Monet was not only the creator of what we now view as French Impressionist painting, he was also its last major practitioner. By the time he passed away in 1926, he had outlived all the other painters--Renoir, Morisot, Pissarro, Sisley, and the others whom we now group together under that heading. Yet when André Suarès, one of the four directors--along with Gide, Valéry, and Claudel--of the influential Nouvelle Revue Francaise, summed up the movement that year, he did not give Monet pride of place. Rather, he wrote, "Far more than Sisley, Claude Monet, or the Goncourt brothers, Loti was the great Impressionist."

As this shows, that Pierre Loti, the once world-renowned French novelist, developed a remarkably Impressionist style was recognized early on. It continues to be acknowledged in France today. Franck Ferrand, a contemporary historian known for his appearances on French radio and television, recently wrote that "Pierre Loti [is] the only truly impressionist writer of French literature." Yet while those who know his work in France continue to see him as an Impressionist artist on the level of Monet and Renoir, no one has ever asked how he achieved this in literature, how he went about creating novels that resembled the work of Monet.

That is the subject of this book. Examining certain of Loti's important novels, this study shows how he managed to reproduce with words what Monet was doing in oils. It also shows how the author came to theorize about the effects of Impressionism on the reader-viewer. Finally, it demonstrates how and why, in one of his last novels, Loti undertook to reproduce the style of one of the painters most admired by Monet: Rembrandt van Rijn, whom the nineteenth-century French rediscovered in part because they could present his sketchy biography as a demonstration of many of the things liberal art historians and painters believed the ideal artist should be.

Richard M. Berrong is professor of French and director of the Master of Liberal Studies Program at Kent State University.
For more information about Richard M. Berrong, visit the Author Page.