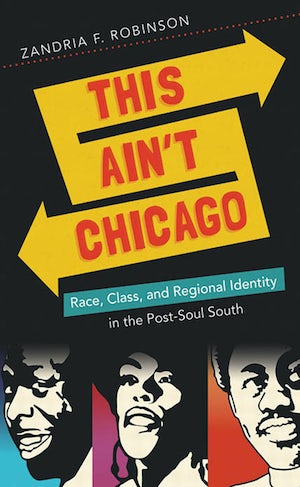 When Zandria Robinson returned home to interview African Americans in Memphis, she was often greeted with some version of the caution "I hope you know this ain't Chicago." In this important new work, Robinson critiques ideas of black identity constructed through a northern lens and situates African Americans as central shapers of contemporary southern culture. Analytically separating black southerners from their migrating cousins, fictive kin, and white counterparts, Robinson demonstrates how place intersects with race, class, gender, and regional identities and differences.

Robinson grounds her work in Memphis--the first big city heading north out of the Mississippi Delta. Although Memphis sheds light on much about the South, Robinson does not suggest that the region is monolithic. Instead, she attends to multiple Souths, noting the distinctions between southern places. Memphis, neither Old South nor New South, sits at the intersections of rural and urban, soul and post-soul, and civil rights and post-civil rights, representing an ongoing conversation with the varied incarnations of the South, past and present.

Zandria F. Robinson is assistant professor of sociology at Rhodes College. She is coeditor of Repositioning Race: Prophetic Research in a Post-Racial Obama Age.
For more information about Zandria F. Robinson, visit the Author Page.

“A welcome and even essential book. . . . Robinson convincingly shows that black Southerners no longer feel ashamed to embrace their Southern roots.”--Chapter 16

“Unfolds in magisterial fashion...A self-aware, distinctively southern perspective on the South that is often absent from urban ethnography.”--American Journal of Sociology

“[Robinson’s] vibrant prose and her keen cultural eye are timely and unprecedented. . . . Her work ultimately encapsulates the rich growing body of new black Southern studies and is a worthy contribution to the field.”--Arkansas Review

In this guest blog post, Zandria Robinson discusses the significance of the OutKast reunion at Coachella this year and the southern hip-hop landscape that the group helped build. Read "OutKast Reunion Tour: After Twenty Years, the South Still Got Something to Say."

Watch: Zandria Robinson and Regina N. Bradley on an episode of Outkasted Conversations where they discuss the significance of Outkast in the Hip-Hop landscape and the South.