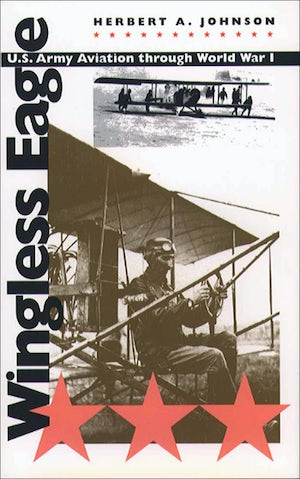 At the start of the twentieth century the United States led the world in advances in aviation, with the first successful engine-powered flights at Kitty Hawk, North Carolina, and Dayton, Ohio, beginning in 1903. Fifteen years later, however, American airmen flew European-designed aircraft because American planes were woefully inadequate for service on the Western Front. Why was the United States so poorly prepared to engage in aerial combat in World War I?

To answer this question, Herbert Johnson takes a hard look at the early years of U.S. military aviation, exploring the cultural, technical, political, and organizational factors that stunted its evolution. Among the recurring themes of Johnson's narrative are the damaging effects of a chronic lack of governmental funding for military aeronautics and the disruptive influence of a civilian "aeronaut constituency" both on military discipline and on public and Congressional attitudes toward army aviation. In addition, the Wright brothers' patent litigation hindered the technical development of American aircraft and crippled the domestic aviation industry's manufacturing capacity. Wartime experience helped correct some of these problems, but the persistence of others left the postwar Air Service with an uncertain and stormy future.

Herbert A. Johnson is professor emeritus at the University of South Carolina. Author of eleven previous books, most recently The Chief Justiceship of John Marshall, 1801-1835, he retired from the U.S. Air Force Reserve in 1987.
For more information about Herbert A. Johnson, visit the Author Page.

"Johnson's unique study goes well beyond a limited examination of army aviation during that time by considering the broader cultural, personal, technical, political, and organizational impediments that hampered the growth of aviation. . . . Johnson's excellent contribution will be widely read and frequently referenced by all serious scholars interested in early U.S. military air power."--Journal of American History

"An absorbing book, covering many rather neglected aspects of early aviation in the USA. It should be read by all who have an interest in this period, regardless of whether their specific concerns are military or civil aviation, air power doctrine, or the nascence of the USA's aircraft industry."--Aeroplane

"Johnson deserves to be congratulated for a job well done. His book redefines the way in which future historians will look at military aviation in the period from 1907 to 1918, and the turmoil of the interwar years."--American Historical Review

"Adds to the scholarship of studies on early American aviation and should be a part of professional and personal libraries."--Air and Space Power Journal

"For the first time in many years we now have a detailed, thoughtful study of the evolution of American aviation up to the U.S. participation in WWI in 1917."--Choice

"Johnson's book puts the development of military aviation before and during WWI into the social and economic context in which it really belongs. . . . Fascinating. . . . Thought-provoking."--World War I Aero