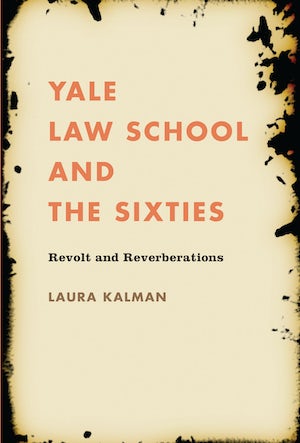 The development of the modern Yale Law School is deeply intertwined with the story of a group of students in the 1960s who worked to unlock democratic visions of law and social change that they associated with Yale's past and with the social climate in which they lived. During a charged moment in the history of the United States, activists challenged senior professors, and the resulting clash pitted young against old in a very human story. By demanding changes in admissions, curriculum, grading, and law practice, Laura Kalman argues, these students transformed Yale Law School and the future of American legal education.

Inspired by Yale's legal realists of the 1930s, Yale law students between 1967 and 1970 spawned a movement that celebrated participatory democracy, black power, feminism, and the counterculture. After these students left, the repercussions hobbled the school for years. Senior law professors decided against retaining six junior scholars who had witnessed their conflict with the students in the early 1970s, shifted the school's academic focus from sociology to economics, and steered clear of critical legal studies. Ironically, explains Kalman, students of the 1960s helped to create a culture of timidity until an imaginative dean in the 1980s tapped into and domesticated the spirit of the sixties, helping to make Yale's current celebrity possible.

Laura Kalman is professor of history at the University of California, Santa Barbara. She is author of three books, including Legal Realism at Yale, 1927-1960; The Strange Career of Legal Liberalism; and Abe Fortas: A Biography.
For more information about Laura Kalman, visit the Author Page.

"By being the first person ever to try to understand and so seriously to portray any group of law students at a time and place, Laura [Kalman] has provided a baseline from which to attempt to consider what separates those students from law students today."--Law and Social Inquiry

"An outstanding read for anyone interested in American institutions during the late 1960s and early 1970s."--Law and History Review

"[A] remarkable study about legal education, about how 1960s issues permeated campus life, and about individuals caught up in the archetypical generational struggle between liberals and radicals."--American Historical Review

"[Yale Law School and the Sixties] stands as a fine study of campus politics in the sixties."--Law and Politics Book Review

"[Yale Law School and the Sixties] is best in its thorough consideration of the ideological struggles that pitted legal realism, legal liberalism, and the legal process school against a host of challenges."--Journal of American History

"Laura Kalman's new book on the Yale Law School is a stunning work of microhistory--no academic institution has ever been studied in greater depth. At the same time, the book also illuminates general developments in American culture during an especially important period in our history."--Sanford Levinson, University of Texas Law School