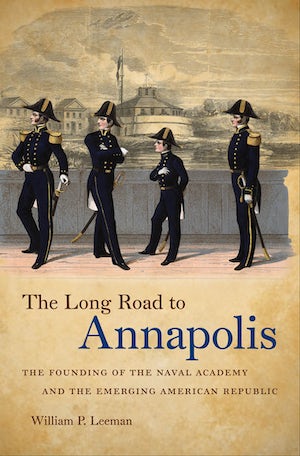 2011 Pendleton Prize, Society for History in the Federal Government

The United States established an academy for educating future army officers at West Point in 1802. Why, then, did it take this maritime nation forty-three more years to create a similar school for the navy? The Long Road to Annapolis examines the origins of the United States Naval Academy and the national debate that led to its founding.

Americans early on looked with suspicion upon professional military officers, fearing that a standing military establishment would become too powerful, entrenched, or dangerous to republican ideals. Tracing debates about the nature of the nation, class identity, and partisan politics, William P. Leeman explains how the country's reluctance to establish a national naval academy gradually evolved into support for the idea. The United States Naval Academy was finally established in 1845, when most Americans felt it would provide the best educational environment for producing officers and gentlemen who could defend the United States at sea, serve American interests abroad, and contribute to the nation's mission of economic, scientific, and moral progress.

Considering the development of the naval officer corps in relation to American notions of democracy and aristocracy, The Long Road to Annapolis sheds new light on the often competing ways Americans perceived their navy and their nation during the first half of the nineteenth century.

"An excellent history of the politics and personalities animating the long debate over whether to establish a naval academy, with many interesting anecdotes along the way. . . . A fine tale of how the Naval Academy came to be."--John Lehman, The Washington Post

"Anyone interested in the struggle for a naval academy or the history of the early republic will find The Long Road to Annapolis an absorbing study."--Naval Institute Proceedings

"Well-written, crisp and effectively organized. . . . Leeman has painted a picture of the maturing nation's divide between those who were satisfied with time-honored methods of military training and those who embraced new concepts of broader education for the nation's military leaders. . . . Fills a significant gap in an important chapter of the evolution of not only the U.S. Navy, but also the nation as a whole."--Charleston Post and Courier

"In his superbly researched book, Leeman does an outstanding job of placing the arguments for and against a naval academy into the context of the evolving US social and political landscape of the early national and antebellum eras. Highly recommended."--Choice

"Leeman does a superior job of contextualization. . . . The Long Road to Annapolis will engage students and general audiences with interesting prose and chapter summaries."--American Historical Review

"The Long Road to Annapolis is an excellent addition to the growing scholarly attention being paid to Annapolis. It is an accessible, well-researched book that demonstrates Leeman's keen capacity for compelling narration."--The Journal of American History