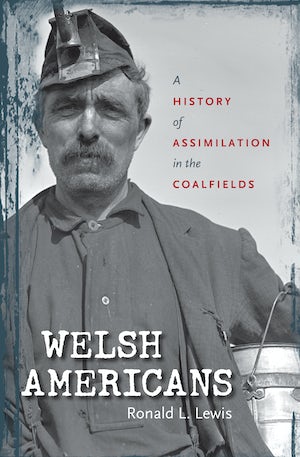 In 1890, more than 100,000 Welsh-born immigrants resided in the United States. A majority of them were skilled laborers from the coal mines of Wales who had been recruited by American mining companies. Readily accepted by American society, Welsh immigrants experienced a unique process of acculturation. In the first history of this exceptional community, Ronald Lewis explores how Welsh immigrants made a significant contribution to the development of the American coal industry and how their rapid and successful assimilation affected Welsh American culture.

Lewis describes how Welsh immigrants brought their national churches, fraternal orders and societies, love of literature and music, and, most important, their own language. Yet unlike eastern and southern Europeans and the Irish, the Welsh--even with their "foreign" ways--encountered no apparent hostility from the Americans. Often within a single generation, Welsh cultural institutions would begin to fade and a new "Welsh American" identity developed.

True to the perspective of the Welsh themselves, Lewis's analysis adopts a transnational view of immigration, examining the maintenance of Welsh coal-mining culture in the United States and in Wales. By focusing on Welsh coal miners, Welsh Americans illuminates how Americanization occurred among a distinct group of skilled immigrants and demonstrates the diversity of the labor migrations to a rapidly industrializing America.

Ronald L. Lewis is Stuart and Joyce Robbins Chair and Professor of History Emeritus at West Virginia University. He is author or editor of fourteen books, including Transforming the Appalachian Countryside: Railroads, Deforestation, and Social Change in West Virginia, 1880-1920 (from the University of North Carolina Press).
For more information about Ronald L. Lewis, visit the Author Page.

"Includes a good assessment of the Welsh interaction with other immigrants. The book's readability also makes it accessible to general audiences, particularly those of Welsh ancestry seeking a better understanding of their ethnic roots. . . . Recommended."--Choice

"The best cross-cultural scholarship on Appalachia written so far. . . . Opens fresh perspectives on the elements of socioeconomic change in Appalachia that can truly be qualified as specifically Appalachian."--Appalachian Journal

"One should read an reread Ronald Lewis's epic Welsh Americans. It is one of the rare books in ethnic history that deserves the appellation classic."--The Annals of Iowa

"A detailed and readable work based on a wide variety of sources from both Europe and the United States. Welsh scholars and comparative immigration historians will find the book to be a valuable asset in their collections."--Journal of Southern History

"Offers a wealth of information on Welsh history and culture in America and Wales. . . . A comprehensive, multidimensional exposition. . . . Extensive knowledge and keen insights [are] conveyed in this monumental research effort."--Journal of American Ethnic History