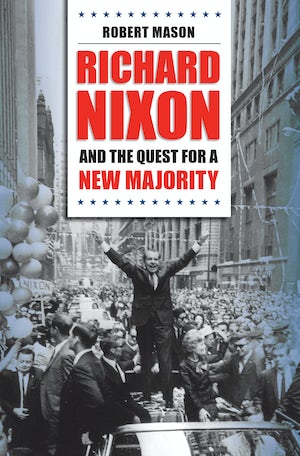 To purchase online via an independent bookstore, visit Bookshop.org
In recent years historians have paid substantial attention to the origins of modern political conservatism and the record of the Nixon administration in building a Republican majority in the late twentieth century. In Richard Nixon and the Quest for a New Majority, Robert Mason analyzes Nixon's response to the developing conservative climate and challenges revisionist claims about the activist nature of the Nixon administration. Nixon was an activist in intent, Mason contends, but not in deed.

Nixon's "silent majority" speech of 1969 not only undermined the growth of the antiwar movement, Mason shows, but also identified a constituency for Nixon to cultivate in order to secure reelection. However, the implementation of his new-majority project was hindered by the resort to dirty tricks against political opponents and the ineffectual pursuit of a policy agenda. Although some Nixon initiatives were enacted, says Mason, they were not substantial enough to rival the Democrats' bread-and-butter issues. While Nixon built Republican strength at the presidential level, Mason argues that he did not succeed in mobilizing popular support for broad-based political conservatism.

Robert Mason is lecturer in history at the University of Edinburgh.
For more information about Robert Mason, visit the Author Page.

"[An] authoritative and scholarly appraisal."--ForeWord

"Mason does a fine job of bringing us back to the turbulent days of the 1960s and 1970s. He makes excellent use of archival materials and his writing is lively and accessible. . . . He executes his task with skill and insight."--American Historical Review

"An important contribution."--Journal of American History

"Richard Nixon and the Quest for a New Majority is a detailed and workmanlike study."--Claremont Review of Books