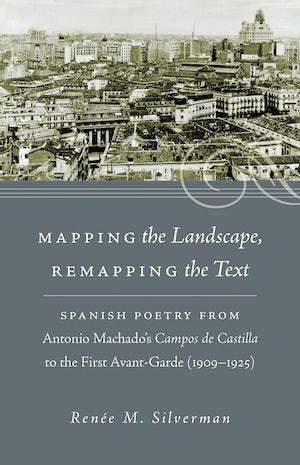 Mapping the Landscape, Remapping the Text: Spanish Poetry from Antonio Machado’s Campos de Castilla to the First Avant-Garde (1909-1925) explores the mapping of identity and memory in Antonio Machado’s (1875-1939) Campos de Castilla (1912, 1917) before studying its disruption by the avant-garde movements Ultraísmo (1918-1925) and Creacionismo (1910s-1930s). Machado’s attribution of identity to the landscape was remapped by the first avant-garde in order to circumvent the placement of identity in textual landscapes that are coded as national or regional, transform the conception of subjectivity and identity through a reconstruction of poetic form, and reposition Spain at the center of the European avant-garde. Renée M. Silverman focuses on the way in which these mappings and remappings affect perspective and perception.

As Silverman argues, both Ultraísmo and Creacionismo employ spatio-temporal simultaneity and the multiperspectivism of abstract visual art idioms such as Cubism to break the bond between people and place that is characteristic of Campos de Castilla. Yet, as Silverman emphasizes, there are some important differences between Ultraísmo and Creacionismo, particularly in Gerardo Diego’s (1896-1987) idiosyncratic brand. This book--the first in English to center on Ultraísmo and Creacionismo--contrasts the way in which Ultraísmo’s leader, Guillermo de Torre (1900-1971), displaces the subject from the terrain of memory, freeing it to cross borders, with how Diego re-roots identity in the textual landscape so as to restore a sense of collectivity to vanguard poetry.

“Silverman delivers a relevant approach to these poets and justifies very clearly the links between their poetic projects, the way they articulated their texts, and the artistic and historical moments in which they lived. Hence, it is a very useful book for college students and researchers interested in the poetry and the aesthetical thought of the time. Moreover, it is a clear example of how geocriticism, structuralism, and formalism may be used in a practical study of poetry and culture.”--Hispania