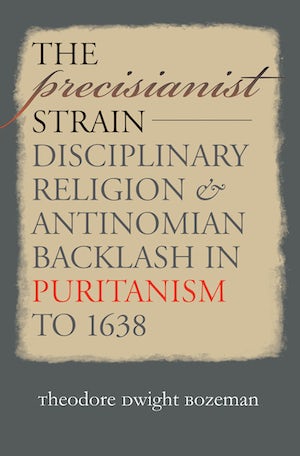 In an examination of transatlantic Puritanism from 1570 to 1638, Theodore Dwight Bozeman analyzes the quest for purity through sanctification. The word "Puritan," he says, accurately depicts a major and often obsessive trait of the English late Reformation: a hunger for discipline. The Precisianist Strain clarifies what Puritanism in its disciplinary mode meant for an early modern society struggling with problems of change, order, and identity.

Focusing on ascetic teachings and rites, which in their severity fostered the "precisianist strain" prevalent in Puritan thought and devotional practice, Bozeman traces the reactions of believers put under ever more meticulous demands. Sectarian theologies of ease and consolation soon formed in reaction to those demands, Bozeman argues, eventually giving rise to a "first wave" of antinomian revolt, including the American conflicts of 1636-1638. Antinomianism, based on the premise of salvation without strictness and duty, was not so much a radicalization of Puritan content as a backlash against the whole project of disciplinary religion. Its reconceptualization of self and responsibility would affect Anglo-American theology for decades to come.

Theodore Dwight Bozeman is professor of religion at the University of Iowa. He is author of To Live Ancient Lives: The Primitivist Dimension in Puritanism and Protestants in an Age of Science: The Baconian Ideal and Antebellum American Religious Thought.
For more information about Theodore Dwight Bozeman, visit the Author Page.

"A rigorous and highly readable account. . . . A masterful exposition of Puritan religious history."--The Journal of Religion

"[A] definitive exposition of the movement's biblical restoration. . . . A brilliant study. . . . Add[s] substantially to scholars' comprehension of the early seventeenth-century transatlantic Puritan movement."--William and Mary Quarterly

"This is a work of mature reflection based on a thoughtful and careful reading of many of the principal clerical sources."--American Historical Review

"Bozeman's book is a mature work of scholarship that fulfills the potential of a previous seminal article and complements his earlier work."--Historical Journal

"[Bozeman's] consideration of the rise of English pietism significantly deepens our understanding of that school of Puritanism."--Seventeenth Century News

"Dwight Bozeman elaborates English Protestant devotional routine. . . . He argues forcefully for the various movements in England and New England termed 'antinomianism' to be seen as sustained protests against and deliberate alternatives to this great and defining Puritan achievement in practical divinity."--Stephen Foster, Northern Illinois University