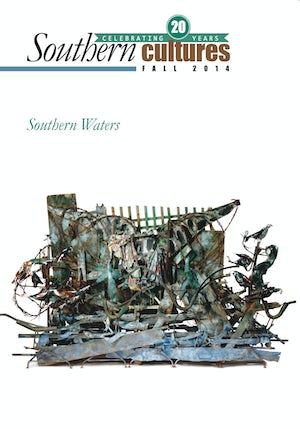 In the Fall 2014 issue of Southern Cultures…

From mullet fishing on Brown’s Island to shrimping on the Gulf Coast, from recreation on the Great Lakes of the South to coastal tourism in the Sunbelt and tramping in the swampy lowlands of eastern NC, we take a look at tourism’s vital role in regional economies and the challenges of conservation and sustainability.

Also in this issue, Andrew W. Kahrl examines the Sunbelt’s foundation, “plac[ing] the coast at the center of the story and seek[ing] to understand how beaches came to reflect and influence broader changes in the region’s cultures and political economy.” Christopher J. Manganiello details the rise of dams on the Savannah River, which now block the migration of shad and sturgeon. “What did the shoals look like when the lilies bloomed?” he asks. “And…what would it be like to witness the great shad migrations and fishing parties of the past?” Ian Draves addresses that question by exploring the Tennessee Valley Authority’s impact on tourism, and John James Kaiser chronicles the battle over rate hikes and regulated energy from North Carolina’s Southern Power Company (now Duke Energy).

David Cecelski’s annotated photo essay, “An Eye for Mullet,” provides witness to Brown’s Island Mullet Camp. The photos, taken by Charles Farrell in 1938, reflect a time when fish dealers in Morehead City, N.C., “loaded so many barrels of salt mullet on outbound freight cars that local people referred to the railroad as ‘the Old Mullet Line.’” Bernard L. Herman and William Arnett offer another visual take on water through the work of artists including Lonnie Holley, Ronald Lockett, and Thornton Dial Jr.

ALSO! Poetry by Patricia Smith; and a short recollection by Bland Simpson on the swamps of his youth.