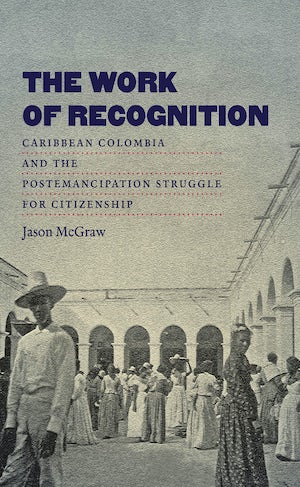 This book tells the compelling story of postemancipation Colombia, from the liberation of the slaves in the 1850s through the country's first general labor strikes in the 1910s. As Jason McGraw demonstrates, ending slavery fostered a new sense of citizenship, one shaped both by a model of universal rights and by the particular freedom struggles of African-descended people. Colombia's Caribbean coast was at the center of these transformations, in which women and men of color, the region's majority population, increasingly asserted the freedom to control their working conditions, fight in civil wars, and express their religious beliefs.

The history of Afro-Colombians as principal social actors after emancipation, McGraw argues, opens up a new view on the practice and meaning of citizenship. Crucial to this conception of citizenship was the right of recognition. Indeed, attempts to deny the role of people of color in the republic occurred at key turning points exactly because they demanded public recognition as citizens. In connecting Afro-Colombians to national development, The Work of Recognition also places the story within the broader contexts of Latin American popular politics, culture, and the African diaspora.

Jason McGraw is associate professor of history at Indiana University.
For more information about Jason McGraw, visit the Author Page.

“Accomplishes the difficult task of providing readers with a lucid overview of national politics, a complex regional history, and a nuanced portrait of 19th-century Afro-Colombian society along the Caribbean Colombian coasts.”--CHOICE

"Tightly-argued….[The Work of Recognition] shall become required reading for those interested in Colombian history."--American Historical Review

“Fascinating. . . . Strongly recommend[ed] . . . to any scholar interested in the process of abolition, its agents, and its consequences worldwide.”--New West Indian Guide

"This innovative book places a marginalized region and marginalized peoples at the center of the historical narrative of the transformations and conflicts of the second half of the nineteenth century. Integrating intellectual and political history, McGraw demonstrates the strong and largely overlooked impact Afro-Colombians had on regional and national history."--Nancy Appelbaum, Binghamton University

"McGraw's wonderful archival depth, his sensitivity toward literary sources, and the provocative way he foregrounds racial politics have yielded an important book that allows historians to understand what came before the overwhelming language of 'metizaje' as a language of citizenship, exploring the cultural politics of the nineteenth century in a way that throws the racial conceptions of the twentieth century into relief."--Ann Farnsworth-Alvear, University of Pennsylvania

"A pathbreaking contribution to postemancipation studies, The Work of Recognition reveals the hidden importance of race in Colombian politics by focusing on the struggles led by the mostly Afro-descended workers of the Caribbean region to forge a democratic and inclusive nation."--Aline Helg, Université de Genève

Read: McGraw writes at the History News Network about the latest agricultural strikes across rural Colombia in "Why Colombian Peasants Are Again in Revolt--And What's Different This Time." (5/25/2014)