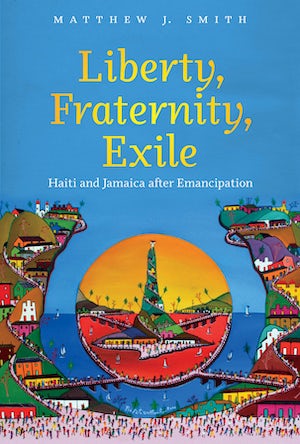 In this moving microhistory of nineteenth-century Haiti and Jamaica, Matthew J. Smith details the intimate connections that illuminate the conjoined histories of both places after slavery. The frequent movement of people between Haiti and Jamaica in the decades following emancipation in the British Caribbean brought the countries into closer contact and influenced discourse about the postemancipation future of the region. In the stories and genealogies of exiles and politicians, abolitionists and diplomats, laborers and merchants--and mothers, fathers, and children--Smith recognizes the significance of nineteenth-century Haiti to regional development.

On a broader level, Smith argues that the history of the Caribbean is bound up in the shared experiences of those who crossed the straits and borders between the islands just as much as in the actions of colonial powers. Whereas Caribbean historiography has generally treated linguistic areas separately and emphasized relationships with empires, Smith concludes that such approaches have obscured the equally important interactions among peoples of the Caribbean.

Matthew J. Smith, senior lecturer in history at the University of West Indies at Mona, is author of Red and Black in Haiti: Radicalism, Conflict, and Political Change, 1934-1957.
For more information about Matthew J. Smith, visit the Author Page.

"Well-researched and beautifully written Liberty, Fraternity, Exile: Haiti and Jamaica after Emancipation, reveals the extent to which the Atlantic must also be interpreted from a regional perspective. . . . Reveals how imperial, national and linguistic boundaries faded as a trans-Caribbean community emerged and came to define the region.”--Journal of Latin American Studies

“A richly documented, meticulously researched, and well-written study which advances our understanding of Haiti and Jamaica in the Victorian era, and takes a refreshingly original approach to the region’s history.”--New West Indian Guide

"Matthew Smith's superb book is a model and argument for thinking and writing differently about Caribbean history through its insistence on the interpenetration and co-construction of different areas within the region. The very human stories of journeys and exiles are a lovely, and gripping, part of the study."--Laurent Dubois, Duke University

"A valuable contribution to the historiographies of Haiti, Jamaica, and the links between them, Liberty, Fraternity, Exile takes seriously the injunctions to historians that are routinely made but rarely followed: to be transnational in approach, to cross linguistic and imperial boundaries. Smith shows convincingly that relationships across the Caribbean Sea need to be taken at least as seriously as those across the Atlantic Ocean."--Diana Paton, Newcastle University

Read: Interview with the author at thepublicarchive.com.