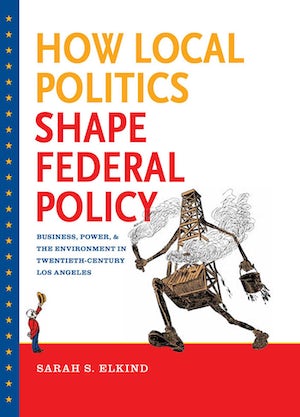 Los Angeles's struggles with oil drilling, air pollution, flooding, and water and power supplies expose the clout business has had over government. Revealing the huge disparities between big business groups and individual community members in power, influence, and the ability to participate in policy debates, Elkind shows that business groups secured their political power by providing Los Angeles authorities with much-needed services, including studying emerging problems and framing public debates. As a result, government officials came to view business interests as the public interest. When federal agencies looked to local powerbrokers for project ideas and political support, local business interests influenced federal policy, too. Los Angeles, with its many environmental problems and its dependence upon the federal government, provides a distillation of national urban trends, Elkind argues, and is thus an ideal jumping-off point for understanding environmental politics and the power of business in the middle of the twentieth century.

Sarah S. Elkind is associate professor of history and former director of environmental studies at San Diego State University. She is author of Bay Cities and Water Politics: The Battle for Resources in Boston and Oakland, which won the Abel Wolman Prize from the Public Works Historical Society.
For more information about Sarah S. Elkind, visit the Author Page.

“An important contribution to the scholarship of American political culture during the middle decades of the twentieth century.”--H-Environment”

"An important monograph [in] the growing literature on the metropolitan development of the American West."--Western Historical Quarterly

"A useful resource."--Technology and Culture

“Elkind does a superb job of bringing to life the nuances of Los Angeles environmental crises and providing the reader with a context for understanding them.”--Enterprise and Society