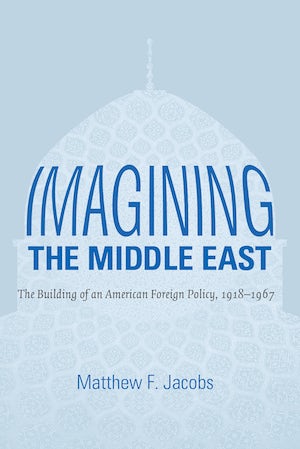 Not for Sale in the Middle East

As its interests have become deeply tied to the Middle East, the United States has long sought to develop a usable understanding of the people, politics, and cultures of the region. In Imagining the Middle East, Matthew Jacobs illuminates how Americans' ideas and perspectives about the region have shaped, justified, and sustained U.S. cultural, economic, military, and political involvement there.

Jacobs examines the ways in which an informal network of academic, business, government, and media specialists interpreted and shared their perceptions of the Middle East from the end of World War I through the late 1960s. During that period, Jacobs argues, members of this network imagined the Middle East as a region defined by certain common characteristics--religion, mass politics, underdevelopment, and an escalating Arab-Israeli-Palestinian conflict--and as a place that might be transformed through U.S. involvement. Thus, the ways in which specialists and policymakers imagined the Middle East of the past or present came to justify policies designed to create an imagined Middle East of the future. Jacobs demonstrates that an analysis of the intellectual roots of current politics and foreign policy is critical to comprehending the styles of U.S. engagement with the Middle East in a post-9/11 world.

“A competent book describing the various groups and individuals that sought to shape American perceptions of and policies in the Middle East from the end of World War I to just after the Arab-Israeli war of 1967.”--Middle East Journal

“An important book on the origins and evolution of how educated and influential Americans have understood the Middle East. . . . An invaluable account of the evolution of American thought about that area, thereby offering at least a fleeting hope that better-informed decisions might lie in our future.”--Journal of American Studies

"A provocative book full of extraordinary archival research, Imagining the Middle East is a must-read for anyone seeking to understand the background to America's collision with radical Islam during the last quarter of the twentieth century."--Douglas Little, Clark University, author of American Orientalism: The United States and the Middle East since 1945

"Jacobs takes a novel, compelling approach to the broad American experience in the Middle East during the formative years of U.S. national involvement there. This book makes a major contribution to the growing literature on the history of U.S. official and non-official interaction with the Middle East in the middle twentieth century."--Peter Hahn, professor of history, The Ohio State University