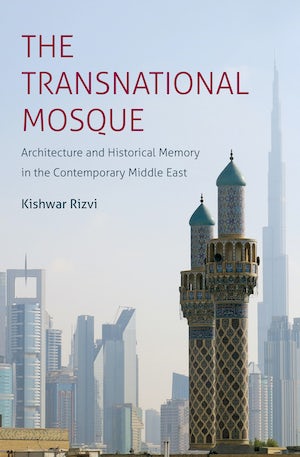 Kishwar Rizvi, drawing on the multifaceted history of the Middle East, offers a richly illustrated analysis of the role of transnational mosques in the construction of contemporary Muslim identity. As Rizvi explains, transnational mosques are structures built through the support of both government sponsorship, whether in the home country or abroad, and diverse transnational networks. By concentrating on mosques--especially those built at the turn of the twenty-first century--as the epitome of Islamic architecture, Rizvi elucidates their significance as sites for both the validation of religious praxis and the construction of national and religious ideologies.

Rizvi delineates the transnational religious, political, economic, and architectural networks supporting mosques in Saudi Arabia, Iran, Turkey, and the United Arab Emirates, as well as in countries within their spheres of influence, such as Pakistan, Syria, and Turkmenistan. She discerns how the buildings feature architectural designs that traverse geographic and temporal distances, gesturing to far-flung places and times for inspiration. Digging deeper, however, Rizvi reveals significant diversity among the mosques--whether in a Wahabi-Sunni kingdom, a Shi‛i theocratic government, or a republic balancing secularism and moderate Islam--that repudiates representations of Islam as a monolith. Mosques reveal alliances and contests for influence among multinational corporations, nations, and communities of belief, Rizvi shows, and her work demonstrates how the built environment is a critical resource for understanding culture and politics in the contemporary Middle East and the Islamic world.

Kishwar Rizvi is an architect and professor of Islamic art and architectural history at Yale University. She is the author of The Safavid Dynastic Shrine: Architecture, Religion and Power in Early Modern Iran and Modernism and the Middle East: Architecture and Politics in the Twentieth Century.
For more information about Kishwar Rizvi, visit the Author Page.