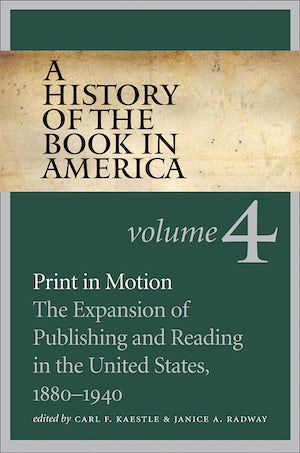 In a period characterized by expanding markets, national consolidation, and social upheaval, print culture picked up momentum as the nineteenth century turned into the twentieth. Books, magazines, and newspapers were produced more quickly and more cheaply, reaching ever-increasing numbers of readers. Volume 4 of A History of the Book in America traces the complex, even contradictory consequences of these changes in the production, circulation, and use of print.

Contributors to this volume explain that although mass production encouraged consolidation and standardization, readers increasingly adapted print to serve their own purposes, allowing for increased diversity in the midst of concentration and integration. Considering the book in larger social and cultural networks, essays address the rise of consumer culture, the extension of literacy and reading through schooling, the expansion of secondary and postsecondary education and the growth of the textbook industry, the growing influence of the professions and their dependence on print culture, and the history of relevant technology. As the essays here attest, the expansion of print culture between 1880 and 1940 enabled it to become part of Americans' everyday business, social, political, and religious lives.

Carl F. Kaestle is University Professor Emeritus in the Departments of Education, History, and Public Policy at Brown University. He is author or editor of six books, including Literacy in the United States: Readers and Reading since 1880.
For more information about Carl F. Kaestle, visit the Author Page.

Janice A. Radway is professor of literature at Duke University. She is author or editor of four books, including Reading the Romance: Women, Patriarchy, and Popular Literature and A Feeling for Books: The Book-of-the-Month Club, Literary Taste, and Middle-Class Desire (both from the University of North Carolina Press).
For more information about Janice A. Radway, visit the Author Page.

"[Kaestle and Radway's] careful editorial hand is evident in the execution as well as the planning of this volume."--The Library

"Eminently measuring up to the superior standard set by the previously issued volumes, Print in Motion is noteworthy not only for the light it sheds on the history of the book, but for the skill with which its contributors set that history in the context of its times. . . . An engrossing narration that will stand for many years as the definitive history of the book in the United States. Persons interested in this subject are encouraged to acquire all five volumes."--Library & Information History

"A model of scholarly publication and institutional cooperation. . . . A timely achievement and a great one. . . . Without university presses, we would still be waiting for HBA."--Journal of Scholarly Publishing

"What the History of the Book series shows so clearly is that the world we know, the communities to which we already belong, are reified and reinforced by books. Such is the incredible and incredibly flexible power of this primitive technology. Behold the book: It is limited but perfect."--Humanities magazine

"The volume reads beautifully, with each essay filling out the framework of the whole. The editors have preserved the distinct authorial voices behind clearly written and well-constructed chapters, which cover the production, circulation, and uses of print. I congratulate the editors for the successful completion of a difficult task, for producing a useful reference book that is much more than the sum of its parts."--Ann Fabian, Rutgers University