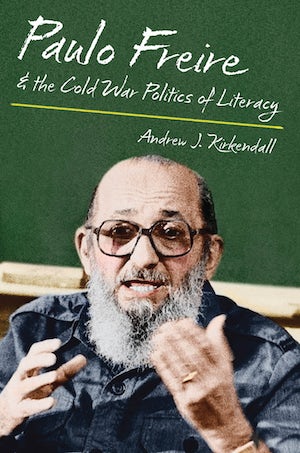 In the twentieth century, illiteracy and its elimination were political issues important enough to figure in the fall of governments (as in Brazil in 1964), the building of nations (in newly independent African countries in the 1970s), and the construction of a revolutionary order (Nicaragua in 1980). This political biography of Paulo Freire (1921-97), who played a crucial role in shaping international literacy education, also presents a thoughtful examination of the volatile politics of literacy during the Cold War.

A native of Brazil's impoverished northeast, Freire developed adult literacy training techniques that involved consciousness-raising, encouraging peasants and newly urban peoples to see themselves as active citizens who could transform their own lives. Freire's work for state and national government agencies in Brazil in the early 1960s eventually aroused the suspicion of the Brazilian military, as well as of U.S. government aid programs. Political pressures led to Freire's brief imprisonment, following the military coup of 1964, and then to more than a decade and a half in exile. During this period, Freire continued his work in Chile, Nicaragua, and postindependence African countries, as well as in Geneva with the World Council of Churches and in the United States at Harvard University.

Andrew J. Kirkendall's evenhanded appraisal of Freire's pioneering life and work, which remains influential today, gives new perspectives on the history of the Cold War, the meanings of radicalism, and the evolution of the Left in Latin America.

Andrew J. Kirkendall is professor of history at Texas A&M Universityand author of Class Mates: Male Student Culture and the Making of a Political Class in Nineteenth-Century Brazil.
For more information about Andrew J. Kirkendall, visit the Author Page.

“I would encourage any new revolutionary government interested in starting a literacy campaign to read this book’s sober analysis of the problems encountered when going from theory to the real world. . . . This well-researched book does a fantastic job of illuminating an important aspect of the Cold War and should be in every syllabus on the history of education in Latin America.”--Journal of Latin American Studies

"Andrew Kirkendall's groundbreaking political biography of Freire brings together, for the first time, an archive fragmented by the great man's many travels and postings."--Latin American Review of Books

"This volume by Andrew J. Kirkendall is, in my judgment, the most authoritative account of the life and times of Paulo Freire. . . . An immensely informative and engaging account of one of the most important educators of our time."--The Americas

“Kirkendall’s book provides scholars with a rare view of Freire as a reluctant politician and historical figure . . . . For scholars interested in the socio-political limits and possibilities for curriculum implementation, this examination of how Freire’s ideas were mutually adapted by the political actors of the Cold War raises some interesting questions about the post-Cold War significance of Freire’s work.”--History of Education Quarterly

"An exemplary primer for the new student. Highly recommended."--Choice

“In this well-written book, Andrew Kirkendall has taken the measure of the man and his utopian project from a much-needed post-Cold War vantage point.”--Royal Institute of International Affairs